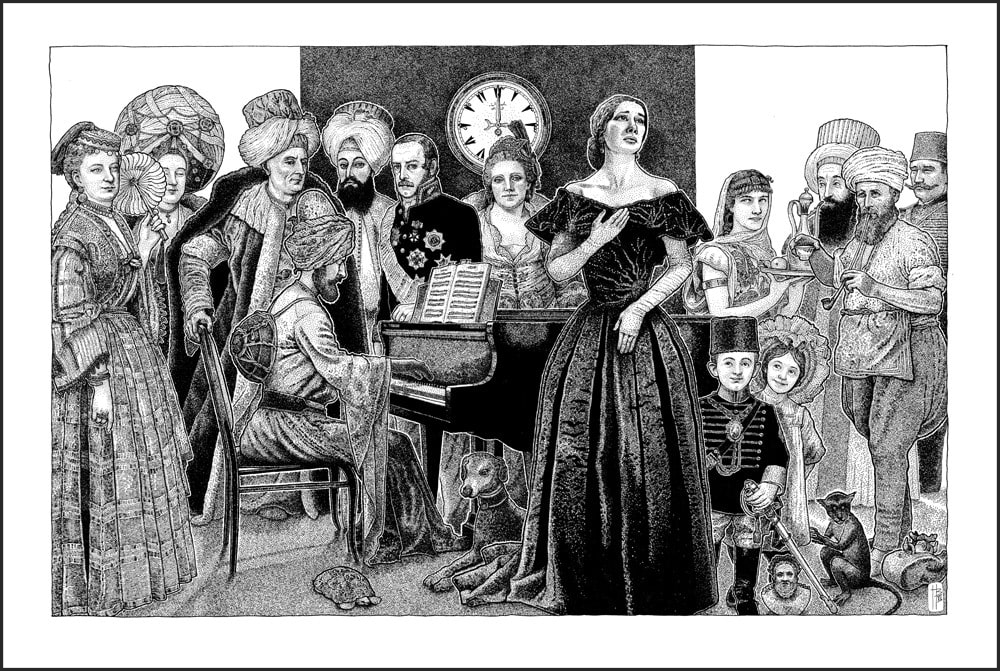 Celebrating its 10th anniversary this year, Pera Museum invites artist Benoît Hamet to reinterpret key pieces from its collections, casting a humorous eye over ‘historical’ events, both imagined and factual. This month, for Maria Callas’s 92th birthday, Hamet’s drawing focuses on Maria Callas’ piano with Callas singing in the front to Pera Museum’s characters from its collections. When the clock made by Mustafa Sem’i strikes 3, Pera Museum’s characters get out of their galleries and gather to listen to Callas.

Currently being exhibited at Pera Café, here’s the story of Maria Callas’ piano:
After travelling by liner across the Atlantic and than to Athens with the piano, Maria Callas, presented it to her teacher Elvira de Hidalgo. When Elvira de Hidalgo fell seriously ill she gave her piano to Mordo Dinar, a music enthusiast.

One evening Yiğit Okur listened to Mordo Dinar’s account of the piano’s story at a dinner given by Suna and İnan Kıraç, and this inspired him to write his novel The Piano. When Mordo Dinar died in 2002 his daughter, who was living in Madrid, wrote to Yiğit Okur saying, “The piano became your novel. I leave it in your charge.” Yiğit Okur gave this news to İnan Kıraç, and Mordo Dinar daughter was asked how much she wanted for it. She replied, “One day, when I am visiting İstanbul take me to one of those shabby taverns on Bosphorus. A glass of rakı and a fresh bluefish are the price of the piano. Just let it not be lost and have an owner who appreciates its worth. “İnan Kıraç did not let her down.

This piano at Pera Museum now belongs to all of us.

All of the characters in the drawing are from our collections, except for Maria Callas! Here’s a list of the art works they’re inspired from: