Constituting the entirety of all the perceived aspects of an object creating their own order, form not only contains visual elements and characteristics, but can also help elucidate concepts. Befittingly, the title Shaping Forms given to this section of the exhibition focuses intensely and distinctly on form; while alluding to notions of ideology and migration, the works selected for this section analyze established forms and create new and different contexts.

The common feature of the works producing new forms over basic concepts of line, space, mass, and scale, is the new ways of thinking they introduce. While the forms the works brought together under the subtitle Shaping Forms recall established forms, in many instances, the ideological and cultural questions hidden behind the familiar form stand out in particular.

Etel Adnan has an international reputation as a writer, poet, visual artist and arts journalist. Adnan’s paintings from the Huma Kabakcı Collection are among her best works of 2012. She prefers small formats, as these gems are, for her, like poems. She says: “Poems are short. I always want to be finished right away. I am impulsive.” So we have compositions that follow an inner monumentality, albeit tamed by the small size. They obtain their presence and effect by the conscious reduction to poem format.

Her earlier works, from the 1950s to the 1970s, were still reminiscent, though not altogether seriously, of Paul Klee or Nicolas de Staël. The search for abstraction in figuration led Adnan to confront the phenomena of nature. In her Californian years, Mount Tamalpaïs north of San Francisco became a major source of inspiration, which brought forth countless pictures, as the artist observed the mountain quasi-ritually in various lights, times of day and seasons. In the two works presented here, no reference to nature is immediately visible, however.

Each painting is composed completely differently, one as a vertical placement of colour forms, the other with a horizontal division. The typical Adnan colours are to be seen: blue, yellow, red and green. The tension on the canvas is produced by the sophisticated juxtaposition of colours. The shapes are deliberately not exactly geometrical; they eschew any rigid structure and place themselves organically on the canvas. Adnan’s colour worlds in these works come across as poetically pervaded. One can see that the way colours are handled in Modernist art and thus the colour experiences of the past century are reflected in concentrated form in Etel Adnan’s works. | TB | 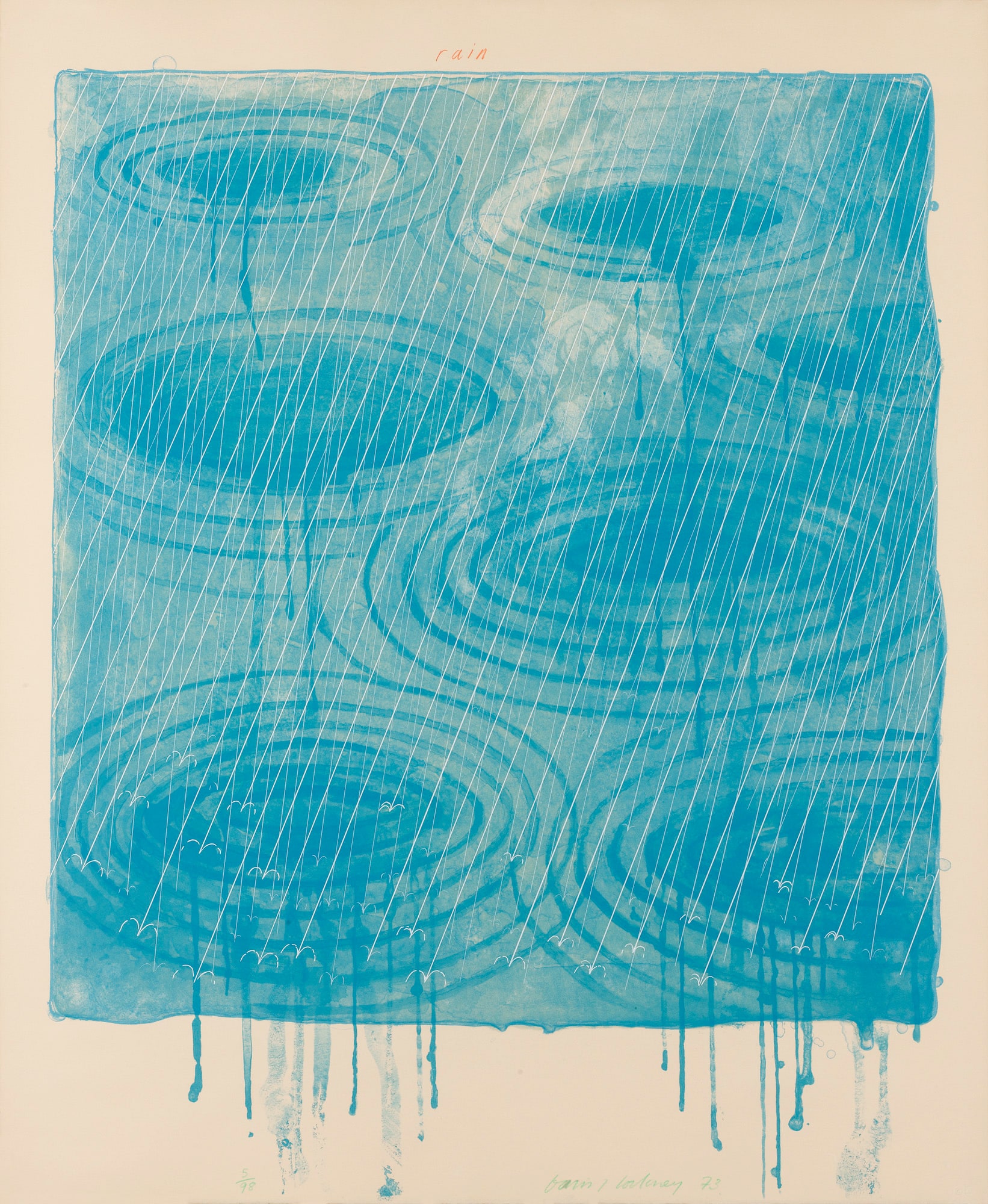 David Hockney’s early works of the 1950s display Expressionist tendencies, sometimes resembling the works of Francis Bacon. A decade later a coloration not dissimilar to that in Pop Art appears in his pictures. In these works, Hockney depicts, in a sober manner, mostly autobiographical experiences which he had previously photographed using a Polaroid camera. From 1963, the snapshots resulted in the ‘Shower Pictures’, the ‘Swimming-pool Pictures’ and the ‘Domestic Scenes’.

This print, Rain, dated 1973, shows the surface of an area of water on which drops are falling and forming rings. The circles touch, resulting in a tension-filled pattern of a rainy landscape, in which the rain also streams (downwards) over the edges of the picture area. This print is one of the artist’s most popular graphic works, not least because he has created a synthesis of figuration and abstraction. | TB | 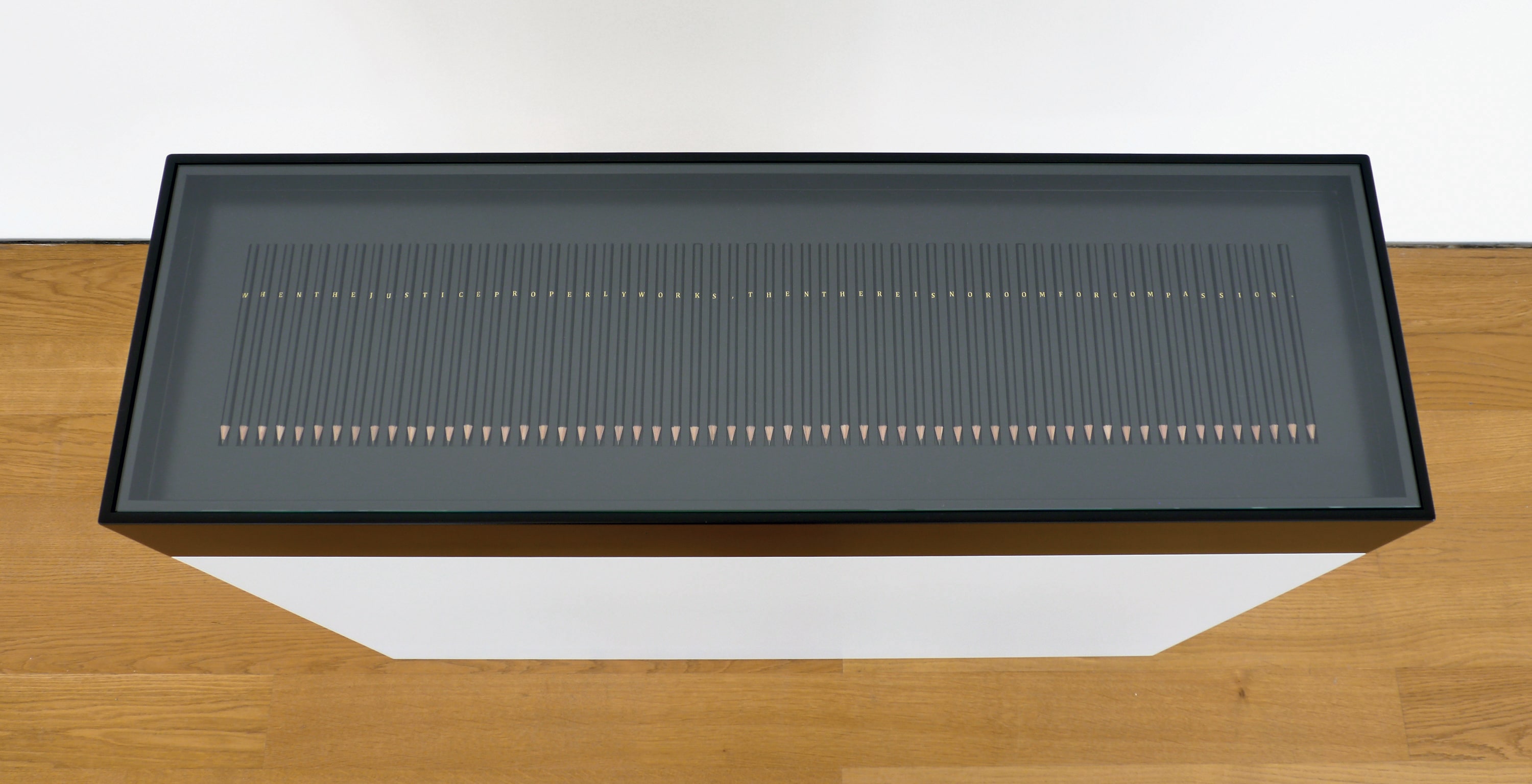 The artistic practice of Özlem Günyol and Mustafa Kunt is based generally on politics, systems, and the notion of justice. Günyol & Kunt take these concepts out of their context, set them free, and transform them into images that create their own space and experience. Forcing the viewer to think and not easily exhausted, their works carry a strong political discourse.

Unique to the Turkish justice system, ‘breaking the pen’ is an action judges can take after sentencing the death penalty. With this motion, the judge wishes not to impose such a penalty again. Based on this symbolic action, the duo’s When the justice properly works, then there is no room for compassion installation dated 2010 leads viewers to contemplate on the notion of justice. | TBa |