The last section of the exhibition brings the father (Nahit Kabakcı) and the daughter (Huma Kabakcı) face to face. Take a look!

Narcissus is a mythological figure that comes face to face with his own image; being a criticism of egotism, this Greek myth perpetuates the notion that looking only at one’s self –and today, we can add introspection to that as well– will lead a person to death. In that context, being face to face does the exact opposite of the act of Narcissus. In the myth of Narcissus, a person’s act of ‘facing’ his own image requires two people when it comes to looking face to face and urges both people to interact with another image outside themselves.

In this exhibition are two ‘individuals,’ whose images we do not see: Nahit and Huma Kabakcı. These two characters are, indeed, constantly facing one another throughout the collection. Although they are the characters of two different perspectives and experiences, they evolve into a single image by way of a collection. It is particularly meaningful to bring two different, yet complementary collectors face to face by using two different works of the same artist. Representing the image of two generations, these neon works articulate the most meaningful last words over the continuity, as much as the diversity, of the collection. 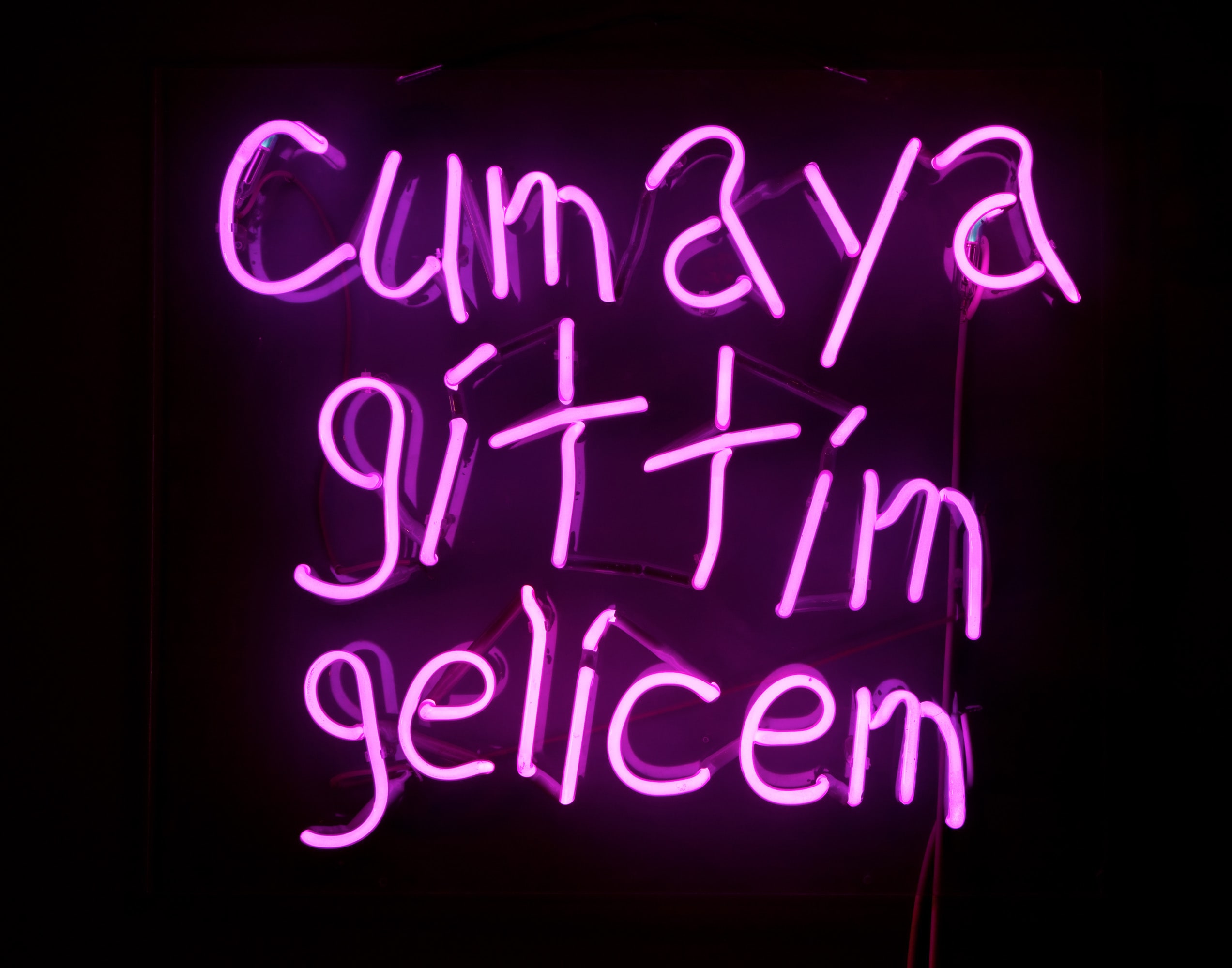 Ardan Özmenoğlu is a sculptress as well as a graphic, installation and light artist. In her many-layered works, she deploys sentences, fragments of text and empty phrases. Thus physical writing is at the centre of her work, which in turn is very close to the contemporary context of Turkish everyday culture.

In the present work, using strip lighting, we see, written in pink light, the sentence, known to everyone in Turkey, ‘Cumaya gittim gelicem’ (‘I’m at Friday prayers in the mosque and will be right back’) but taken out of its everyday context. Often this message is found written on a scrap of paper and placed behind the windscreen wipers of a taxi parked near the mosque, or stuck to the door of a shop closed for the duration of Friday prayers. A sentence that for observant Muslims in Turkey is routine becomes an art object. This message, taken from everyday culture, is released from its original context and raised by the artist to a sphere in which it can be interpreted in many ways, where it may trigger amazement or reflexion on its content.

Ritual, faith and time determine the content of this œuvre, in which the artist invests much love. The work, generally hung higher in the exhibition room than pictures would be, has a signal effect which is almost impossible to ignore. Access to this œuvre in the Turkish language is barrier-free. Anyone can playfully approach it in their own way, and draw their own conclusions.

Ardan Özmenoğlu’s œuvre, from the post-its, which together generate pictures, all the way to the strip-lighting works, constantly refers to her particular position as a female Turkish artist at the start of the twenty-first century, creating an art that could hardly be closer to current events. In this art she creates a position that processes both cultural-historical trends and highly relevant social-political themes with a playful, ironic smile. 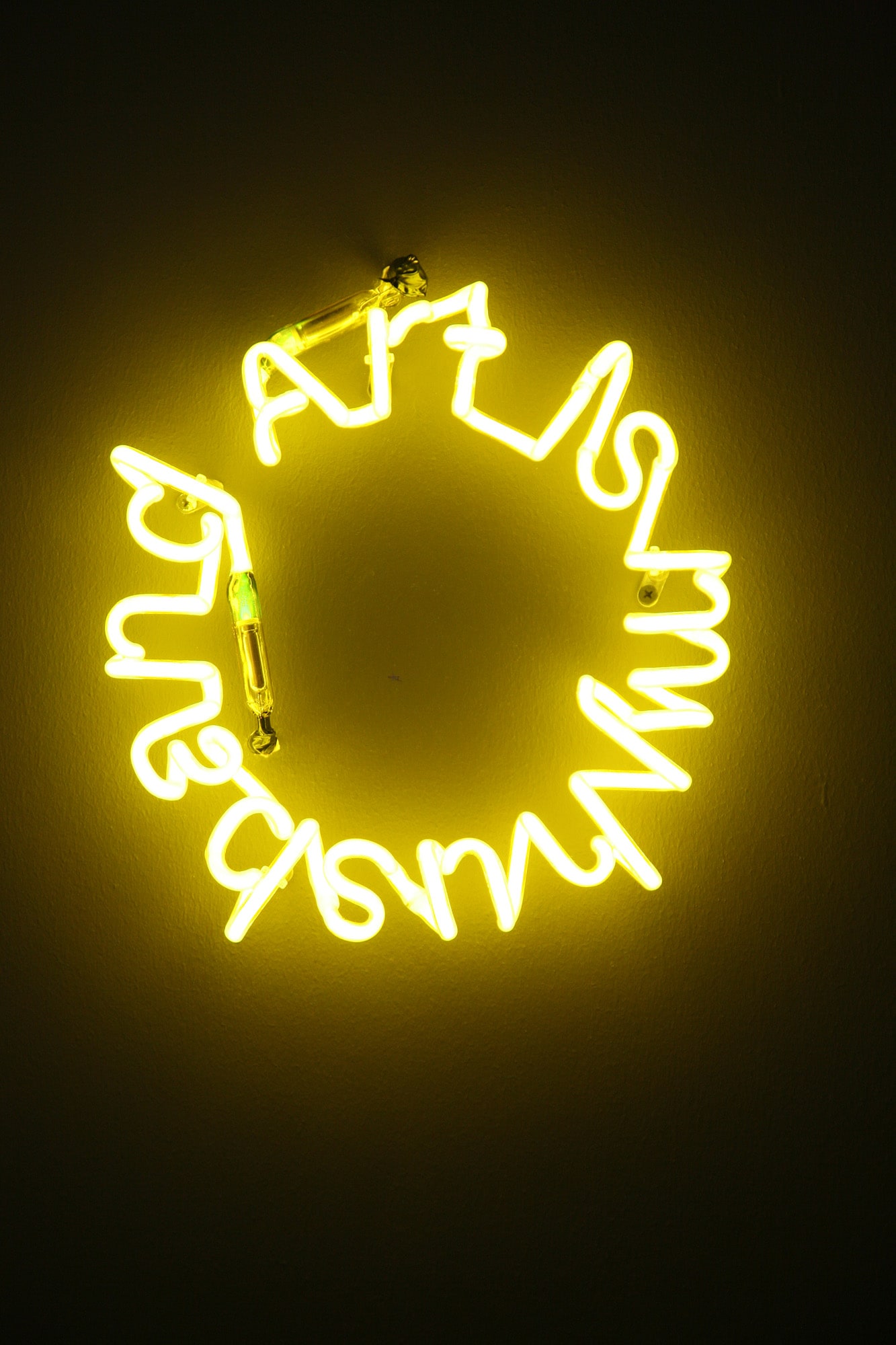 A statement like ‘Art is my Husband’ signifies a radical social examination of a traditional bond, conventional for thousands of years, namely that between man and woman. The artist claims to be married to art, and to exclude any other matrimonial ties. At the same time, she points to a connexion, for an artist, between production and existence. Any great artist, male or female alike, was and is ultimately married to art. Major artists regulate their everyday lives, indeed their whole lives, quite differently from the mainstream of society. They live for their art just as this art, as a result, radiates from them. Great art can only come about on the basis of this understanding of oneself, namely independently of conventions. Ardan Özmenoğlu’s ‘illuminating’ statement can be understood both ironically and existentially. The words, radiating in bright yellow, combine to create an artistic ring which gives expression to an awareness of unity. | TB | 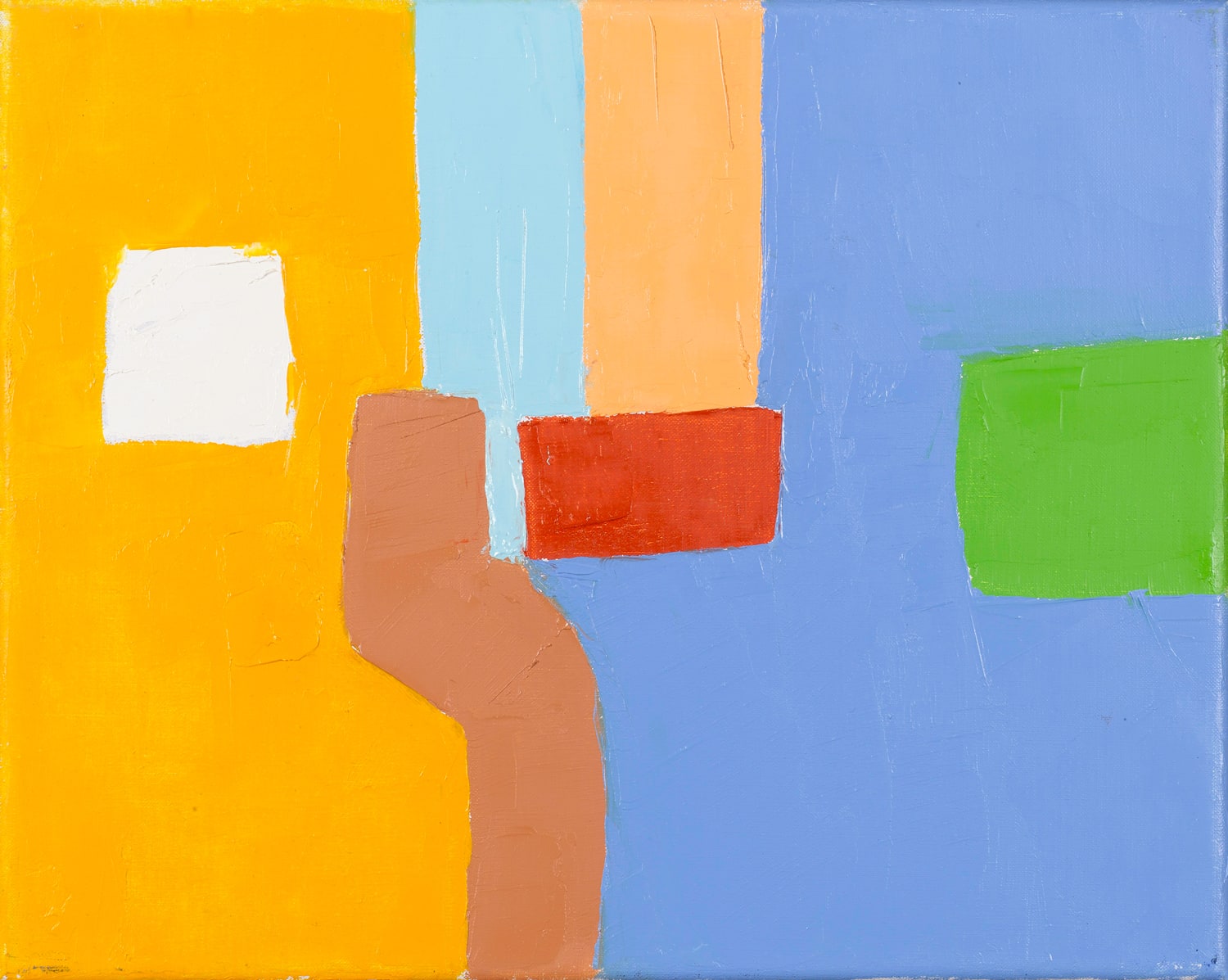