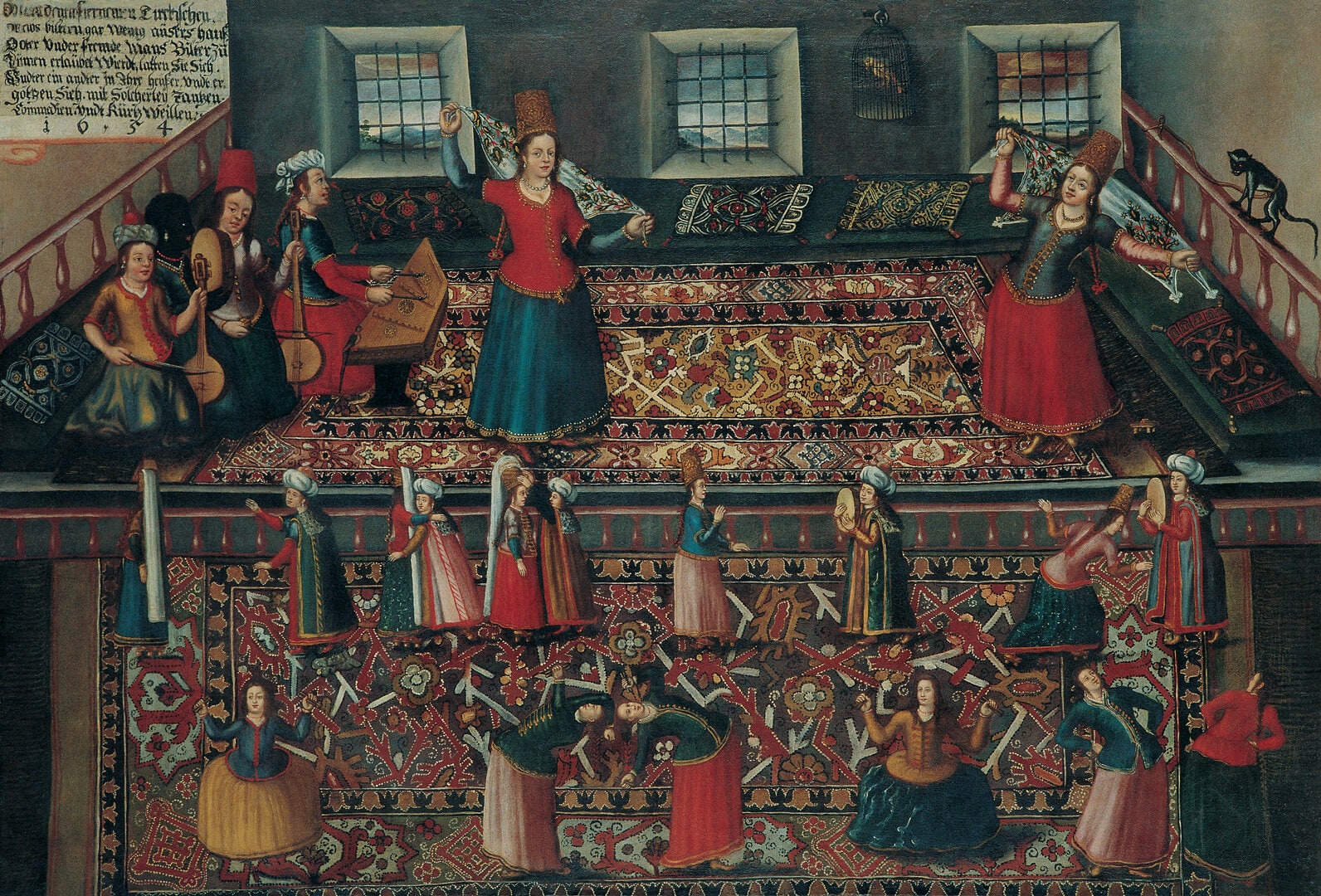 When we examine the Ottoman-themed paintings of indoor everyday life by western painters, musical entertainment attracts attention as a fundamental aspect of the lifestyle. Every so often, in paintings with one figure, women who play music are depicted solely. The painters who often obtained information about the harem, arousing curiosity simple because of its excluding nature towards outsiders, from various types of commentaries included dancing women alongside saz players in their paintings. All-inclusive public coffee houses, depicted in western painters’ paintings, are also one of the main settings in which we chance upon musicians. We have prepared a selection for you from the sceneries found in the Suna and İnan Kıraç Foundation Orientalist Painting Collection!

The Austrian artists, which were in the retinue of the Embassy delegation led by Hans Ludwig von Kuefstein that Holy Roman Emperor Ferdinand II sent to Murad IV in 1628, depicted audiences of the delegation, the sultan and his family, various Ottoman garments and intriguing facets of daily life. This painting is possibly a part of such a series. The 1654 inscription over the painting reads, “As it is not customary for distinguished Turkish ladies to leave the house or meet strangers, they invite each other to their homes and amuse themselves with dance, comedy and similar forms of entertainment”. In the lower section of the painting, guests are greeted while women dance to the rhythm of the tambourine. In the upper section, two women are seen dancing with scarves on their heads and embroidered kerchiefs in their hands, accompanied by musicians playing traditional instruments, such as rebab, santur, and tambourine. The carpets, garments and instruments are depicted in elaborate detail. 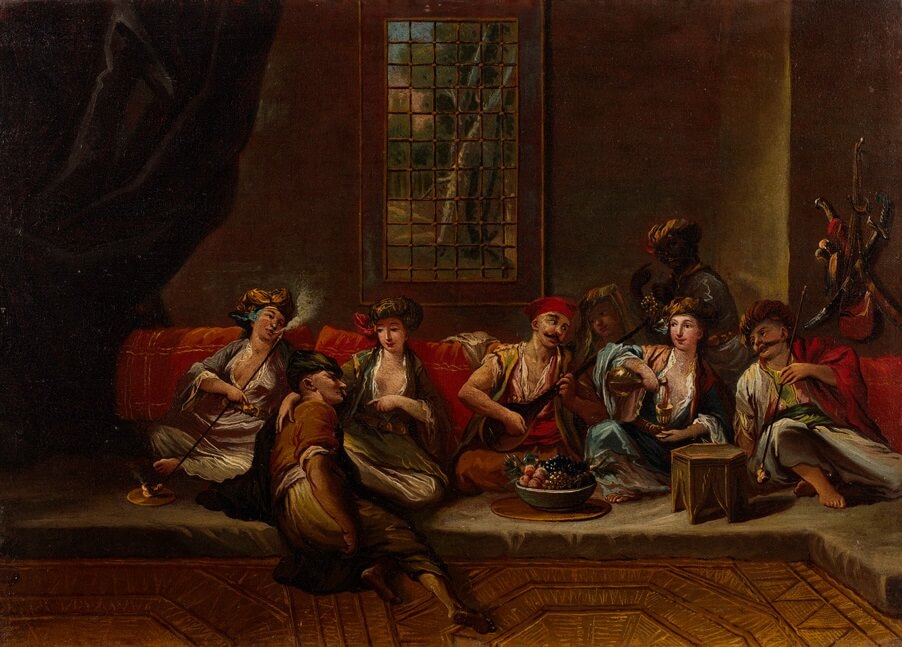 Marines of the Ottoman Navy, The Vanmour School, The first half of the 18th century. Oil on canvas, 44 x 62 cm.

This painting is one of the four works of the Vanmour Studio series depicting a genre scene in Ottoman home interior. There is another painting of the same composition by Antonio or Francesco Guardi made for Schulenburg estate in Vienna. Both works must have been based upon an unknown painting by Vanmour. Another Vanmour painting depicting a countryside excursion at the Rijksmuseum incorporates similar figures. The painting, along with the others in the series, was exhibited in the “Turquerie” exhibition in Paris in 1911. 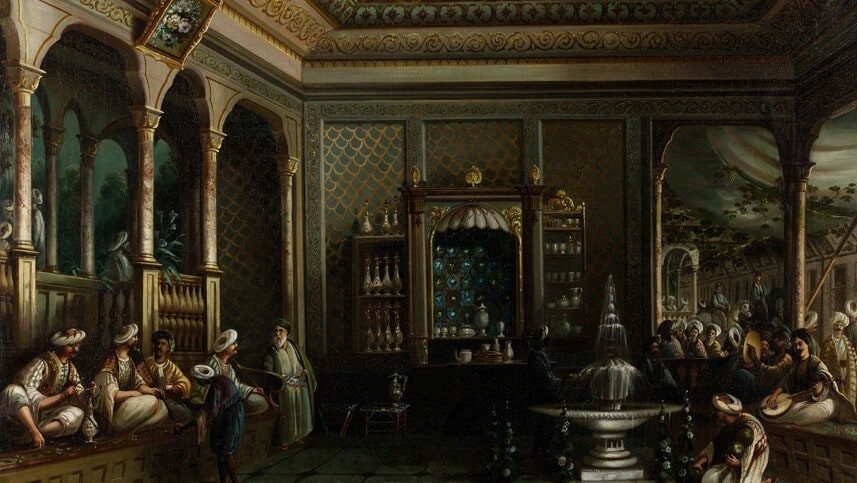 A Coffeehouse in Tophane, Mıgırdiç Civanyan, (From Thomas Allom), Last quarter of the 19th century, Oil on canvas, 96 X 133 cm. 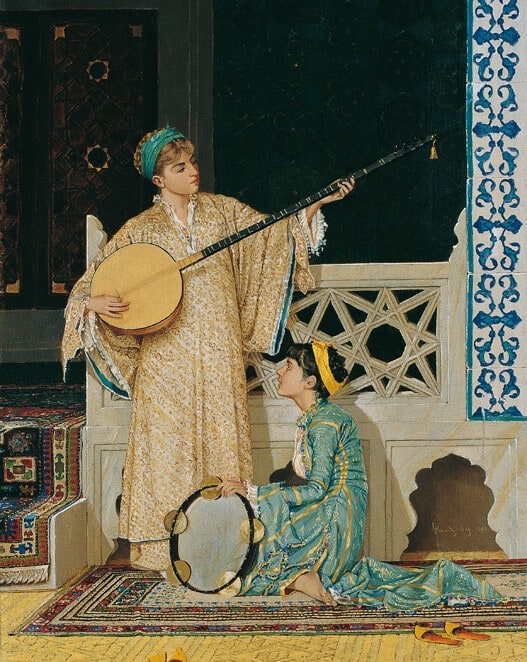 Another Thomas Allom composition which appears in the first volume of Robert Walsh’s book Constantinople and Scenery of Seven Churches of Asia Minor is “The Coffee House”. This is an oil copy of the composition by Civanyan. Allom’s depictions of genre scenes in İstanbul during the reign of Mahmud II were later used as models by many 19th century artists. Various copies by Unknown Painters of the same composition exist in a number of private collections in Turkey. In the corresponding text, Robert Walsh provides information on the interior organization and decoration of the coffeehouses, and relates various details ranging from making music and smoking pipes to the plays of the meddah (story tellers).

Although he is regarded as an Orientalist painter, Osman Hamdi Bey’s perception of the East is remarkably different his Western counterparts. As opposed to the Western Orientalists who emphasize sexuality in their female figures, in Osman Hamdi Bey’s paintings the female figures are often conscious of the period of Westernization in the Ottoman Empire, as well as their individual identities and talents, and are thus open to learning and self-development. In a number of Osman Hamdi Bey’s works, the Ottoman woman is portrayed while playing an instrument, reading, or arranging the flowers in her house and she always appears fully clothed. In this painting, which incorporates architectural elements of the Bursa Green Mosque, apart from musical instruments like the tambur (lute) and the tambourine, Ottoman decorative elements such as rugs, woodwork, stone carving, and tiles complement the artist’s unique approach to the female identity. 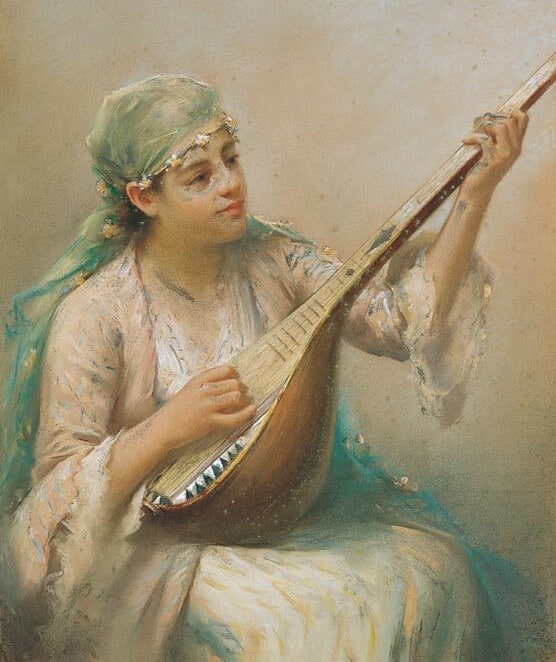 In this painting an Ottoman woman in her daily attire, her hair covered with an embroidered and printed kerchief plays a string instrument. Music was one of the most popular kind of amusement in Turkish harems. Particularly the ut (lute), and similar string instruments, have always occupied a very important place in the lives of women. This picture was used on the front cover of a special issue of Le Figaro Illustré dedicated to Zonaro published in 1908, and also appeared in Dér’i Sé’adet, a book written by Adolphe Thalasso and illustrated by Zonaro. 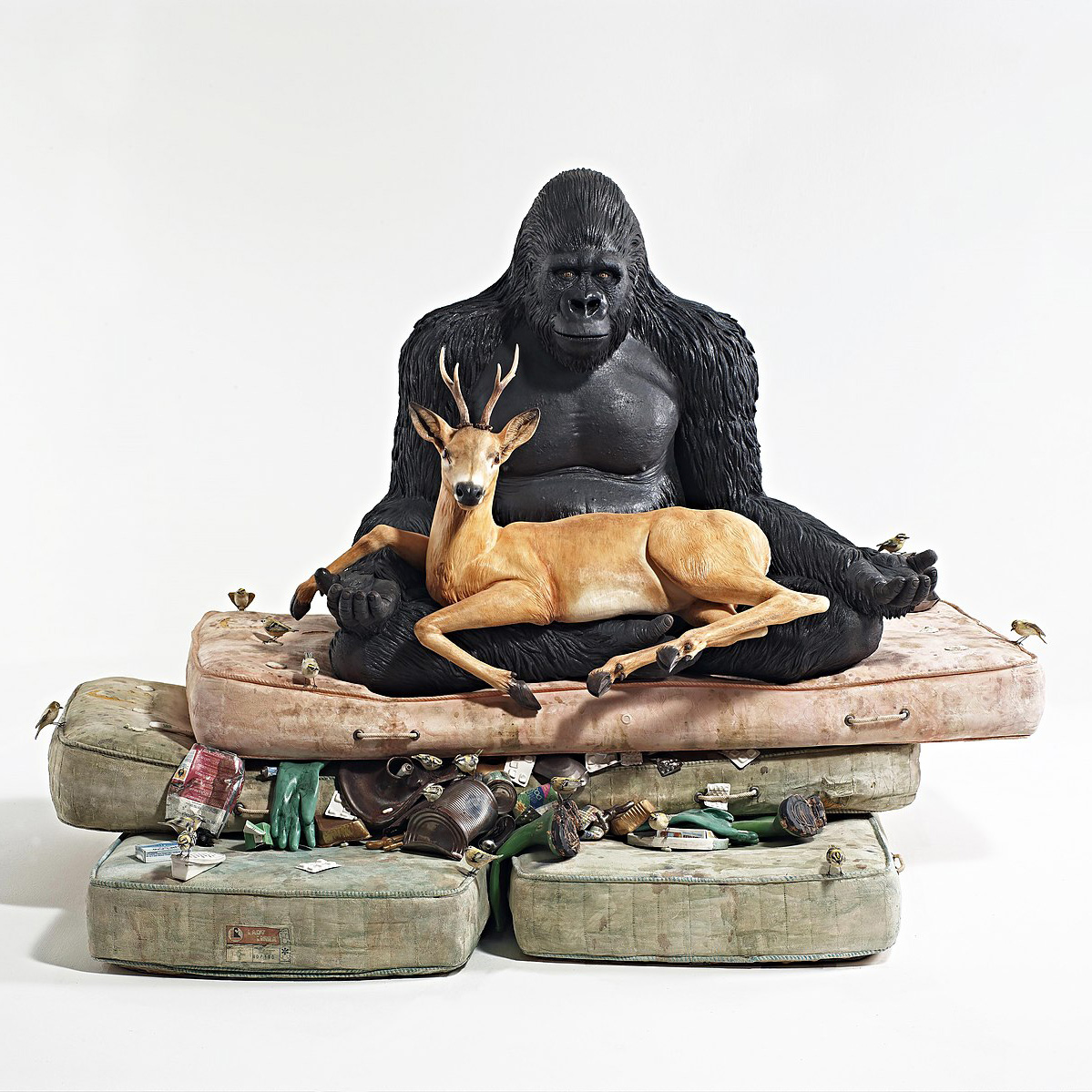