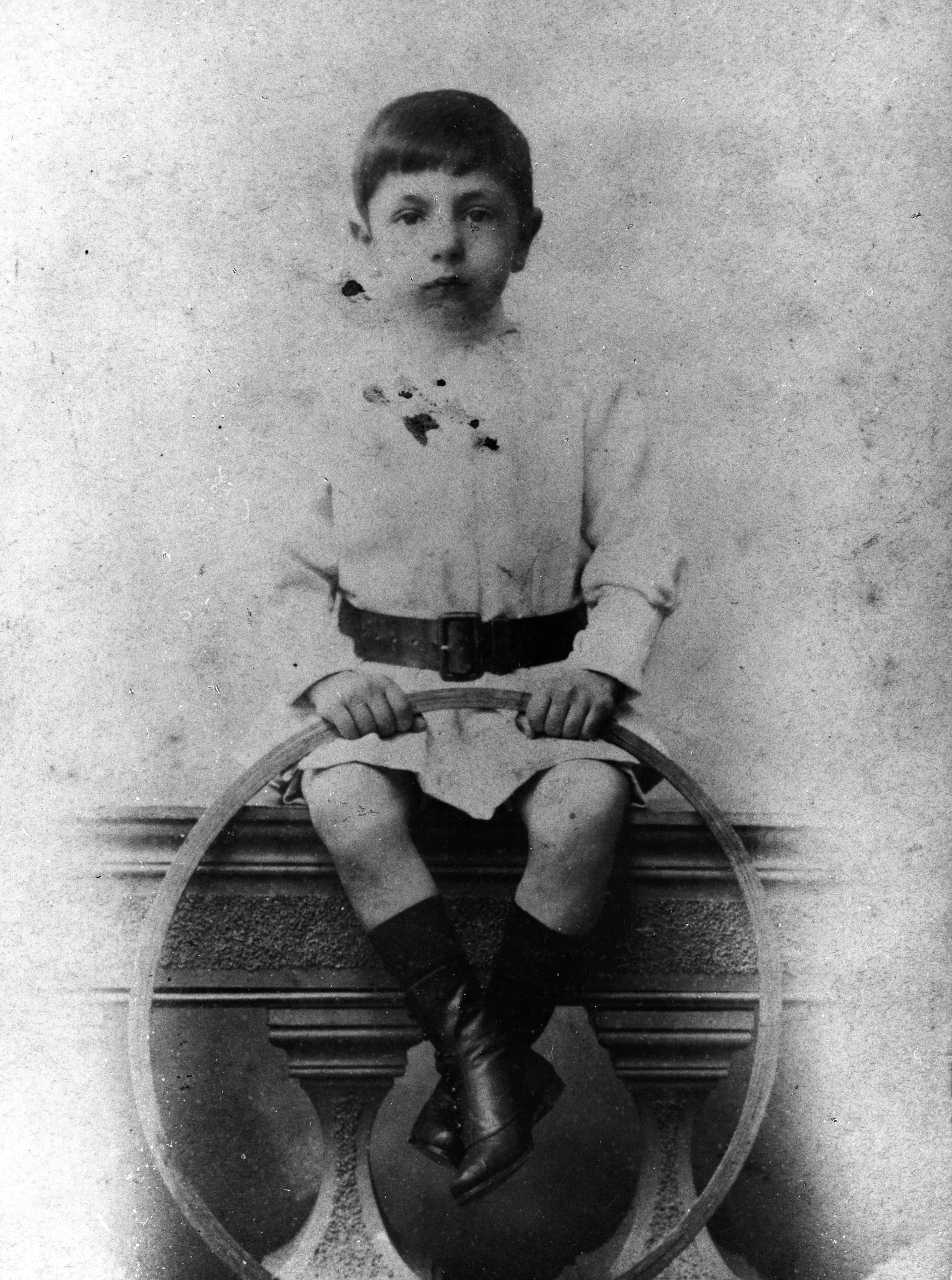 Giorgio de Chirico was born on 10 July 1888 in Volos, Greece, to Italian parents. His mother, Gemma Cervetto, was probably born in Smyrna but her family was of Genoese origins. His father Evaristo was born in Istanbul (Büyükdere sul Bosforo), where the family chapel is situated in the ‘Katolik Mezarlığı’ cemetery. His grandfather was a dragoman (an official translator), for the Russian tsars at the Sublime Porte, as well as representative of the Kingdom of Sardinia. Having completed his engineering studies in Italy, Evaristo returned to Turkey to supervise the construction of the railway from Constantinople to Adrianople in 1870-1873. He was later engaged in the construction of the Thessaly railway in Greece. In August 1891 Giorgio’s brother Andrea (who changed his name to Alberto Savinio in 1914) was born in Athens. In 1896, the family returned to Volos where they stayed until 1899 and where Giorgio took his first drawing lessons. They moved back to the capital where he attended the Athens Polytechnic from 1903-1906. After several years of ill health, his father died in May 1905.

In September 1906, the mother decided to leave Greece with her sons. After two short stopovers in Venice and Milan, the family settled in Munich where Giorgio attended the Academy of Fine Arts whilst Andrea studied music. Giorgio studied the art of Arnold Böcklin and Max Klinger, and read the works of Nietzsche, Schopenhauer and Weininger with great interest. In June 1909, he moved to Milan where he executed paintings inspired by Böcklin. He suffered from severe intestinal illness brought about by the death of his father. 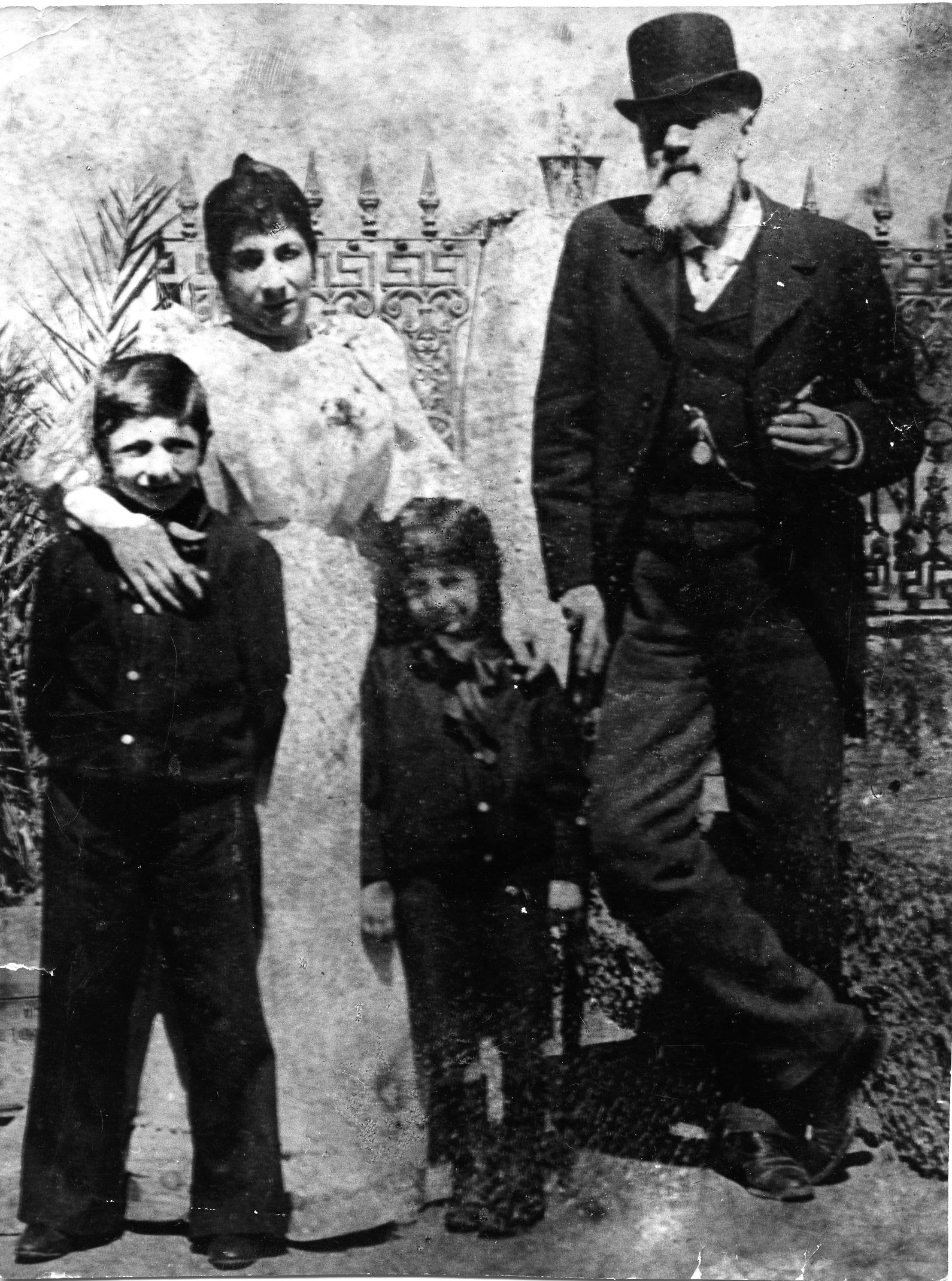 In March 1910, de Chirico moved to Florence with his mother and brother. As he would later write in his Memoirs: “My health grew worse in Florence. Sometimes I painted small canvases. The Böcklin period had passed and I had begun to paint subjects in which I tried to express the strong and mysterious feeling I had discovered in Nietzsche’s writings: the melancholy of beautiful autumn afternoons in Italian cities”. He painted his first metaphysical painting: The Enigma of an Autumn Afternoon, inspired by a vision he had in Piazza Santa Croce. He also painted The Enigma of the Oracle, The Enigma of the Hour and the famous Self-portrait inscribed with the Nietszchean epigraph “Et quid amabo nisi quod aenigma est?” (And what shall I love, if not that which is enigma?). In 1911 he moved to Paris where he exhibited for the first time at the Salon d’Automne in 1912. He further developed the Italian Piazza theme and began work on the Mannequin theme. Picasso and Apollinaire took notice of his work. Apollinaire, who greatly admired his paintings, wrote a review of the exhibition the artist held in his studio in October in L’Intransigeant. He defined de Chirico as ‘the most surprising painter of the young generation’. He met Paul Guillaume, his first art dealer, as well as Ardengo Soffici, Constantin Brancusi, Max Jacob and André Derain. The manuscripts of his first theorisation of Metaphysical Art date to this period.

In May 1915, de Chirico and his brother Savinio returned to Italy to report to the military authorities in Florence and were sent to Ferrara. Assigned to non-combat duty, de Chirico remained in Ferrara where he painted the first works on the Metaphysical Interior theme. During the same period, he painted The Great Metaphysician, Hector and Andromache, The Troubadour and The Disquieting Muses. In 1916, he met Filippo de Pisis who was just 20 years old at the time. In 1917, he spent a few months at the Villa del Seminario military hospital where Carlo Carrà had also been admitted. He came into contact with the Dada circle of Tristan Tzara and the magazine Dada 2. He remained in touch with the Parisian milieu and continued to send his artwork to Paul Guillaume, who held an innovative exhibition on 3 November 1918 during which he presented the artist’s paintings on-stage at Théâtre du Vieux-Colombier. The essay Zeuxis the Explorer came out in the first issue of Valori Plastici in which he proclaimed: “It is necessary to discover the demon in all things. [...] It is necessary to discover the eye in all things. [...] We are explorers ready for new departures”.

On 1 January 1919, de Chirico moved to Rome where he held his first solo show at Casa d’Arte Bragaglia. The essay We Metaphysicians was published, in which one reads: “Schopenhauer and Nietzsche were the first to teach the profound importance of the non-sense of life and how such non-sense can be transferred to Art [...]. The capable and new craftsmen are philosophers who have surpassed philosophy”. His interest in the technical aspect of painting intensified and he became a frequent visitor of museums in Rome and Florence. He studied tempera and panel painting techniques and executed a number of pastiches of works of Italian Renaissance masters. In 1921, he began corresponding with André Breton. He published articles on Raphael, Böcklin, Klinger, Previati, Renoir, Gauguin and Morandi in various periodicals. In 1922, an important exhibition of his work was held at Galerie Paul Guillaume in Paris with 55 works. He participated in the 14th Venice Biennial. He met his wife-to-be, the Russian ballerina and future archaeologist Raissa Gourevitch Krol in 1924 in Rome. 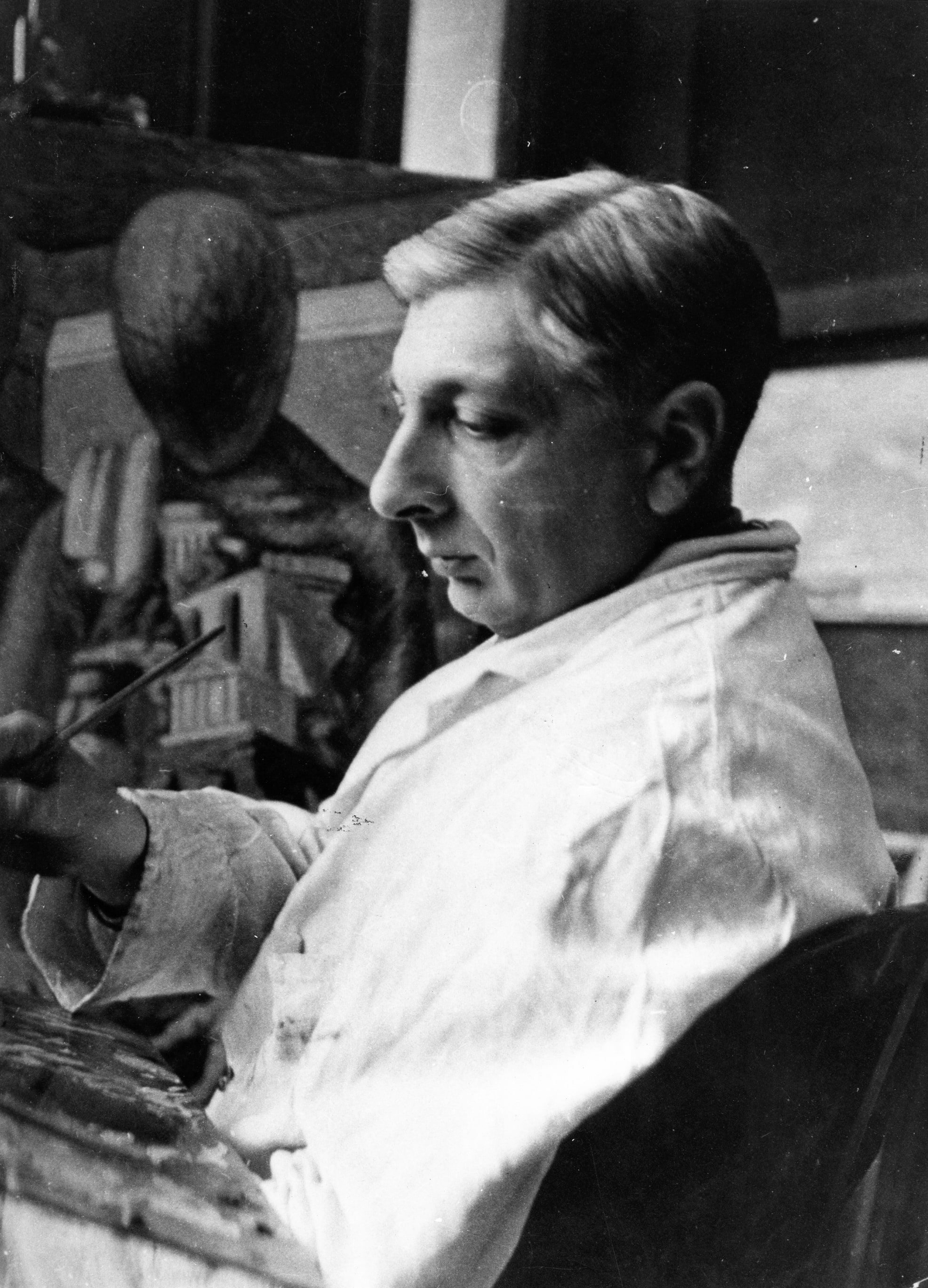 He returned to Paris where he began work on the Metaphysics of Light and Mediterranean Myth themes, creating subject matter such as the Archaeologists, Horses by the Seashore, Furniture in the Valley, Landscapes in a Room and the Gladiators. Following a solo show at Galerie Léonce Rosenberg, his recent work was heavily criticised by the Surrealists. By this time, the rupture with the group was definitive and destined to worsen in the years to come. In 1928, Jean Cocteau’s Le Mystère Laïc – Essai d’étude indirecte was published with lithographs by the artist and Piccolo Trattato di Tecnica Pittorica was published by Scheiwiller in Milan. In 1929, Hebdomeros, le peintre et son génie chez l’écrivain was published. He designed the costumes for Le Bal produced by Serge Diaghilev’s Ballets Russes (Monte Carlo, Paris and London). 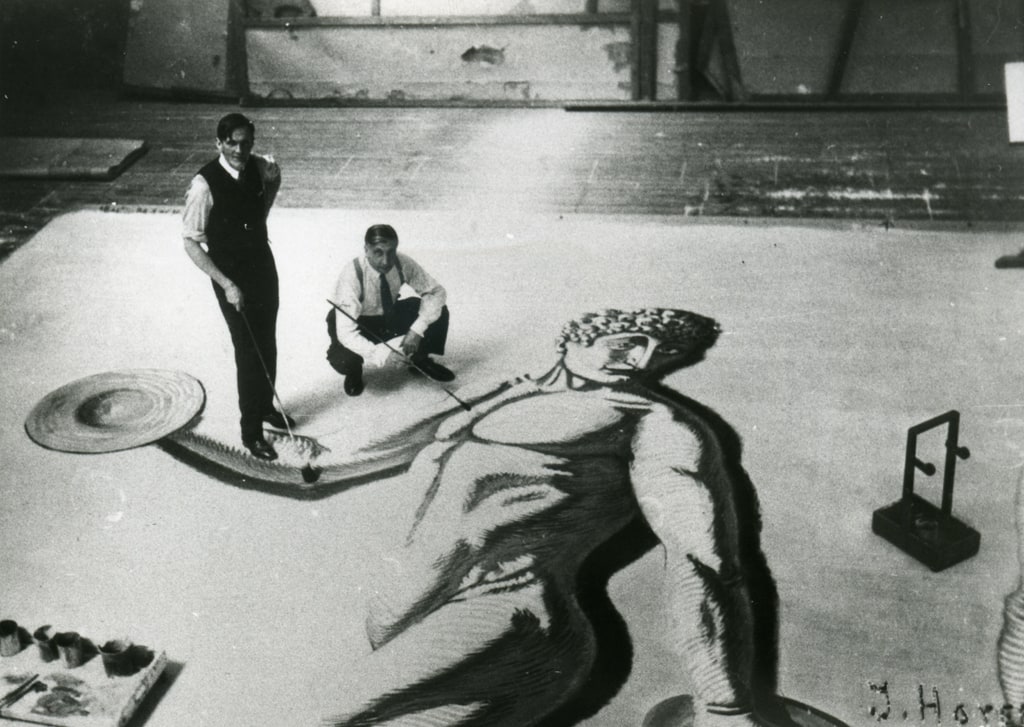 During this period, he painted still lifes, portraits and female nudes of a luminous naturalism. Gallimard published Apollinaire’s Calligrammes illustrated with 66 lithographs in which the Sun on the Easel theme first appeared. He married Raissa on 3 February 1930 when their relationship was already in difficulty. In the autumn, he met Isabella Pakszwer (later known as Isabella Far) who became his second wife and remained his life-long companion. De Chirico and Isabella moved to Florence where they stayed for a year. In 1933, he participated in Milan’s V Triennial for which he painted the monumental fresco La cultura italiana. In 1934, he illustrated Cocteau’s Mythologie with ten lithographs on the Mysterious Baths theme. He participated in the II Roman Quadrennial with 45 paintings of which seven from this new theme. He went to New York in 1936 where he exhibited his recent work at the Julien Levy Gallery. In June 1937, he received news from his brother of their mother’s death. 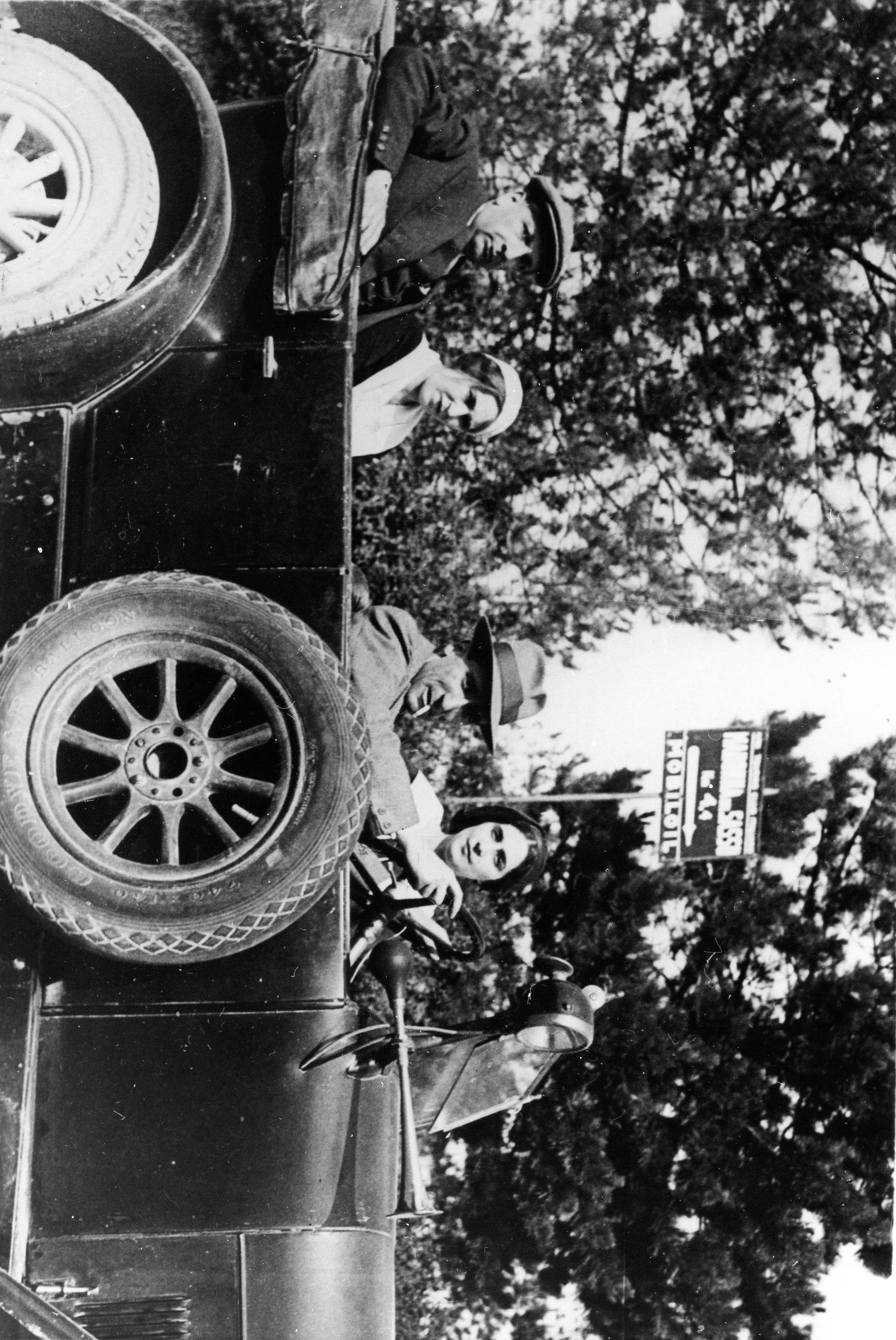 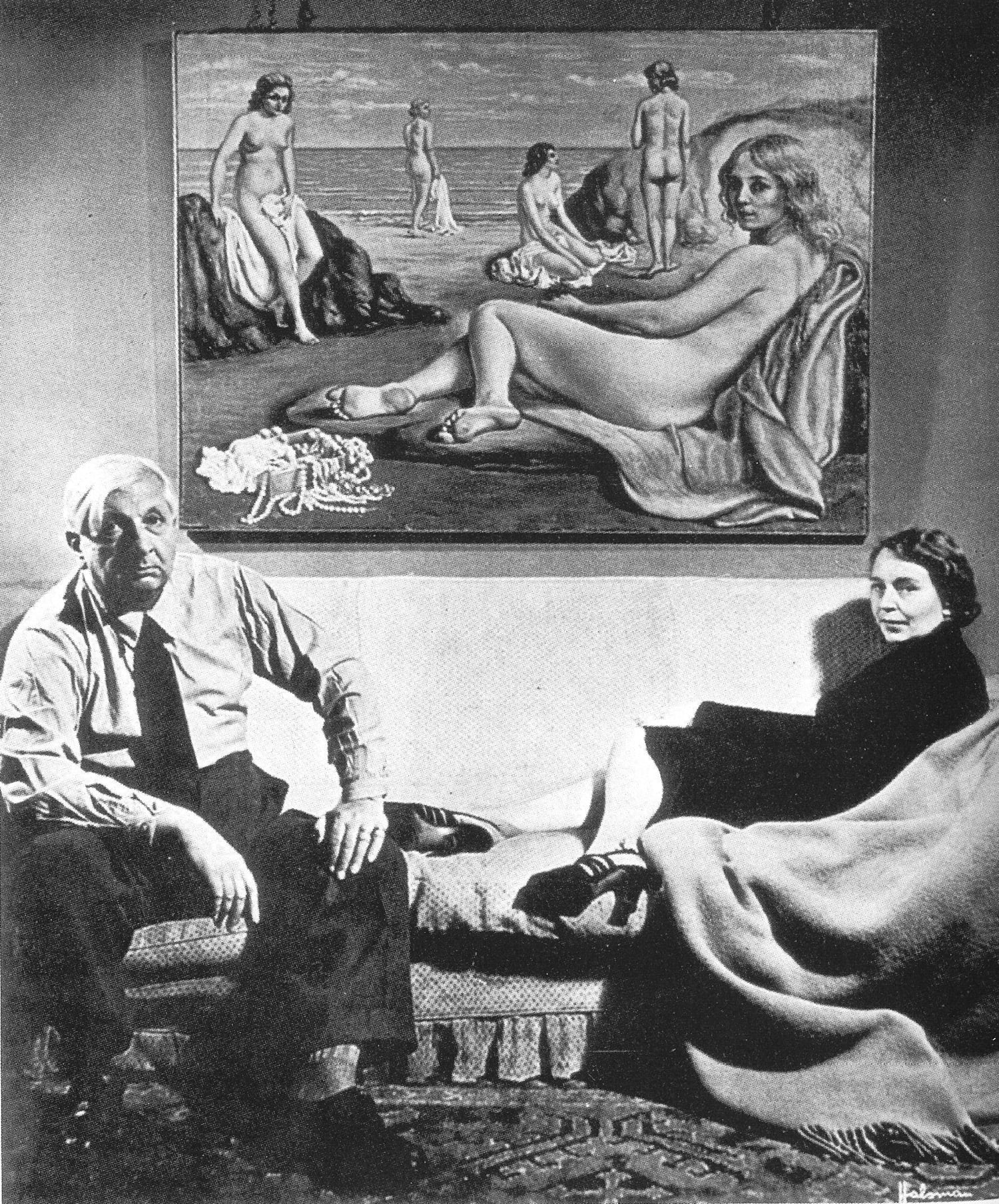 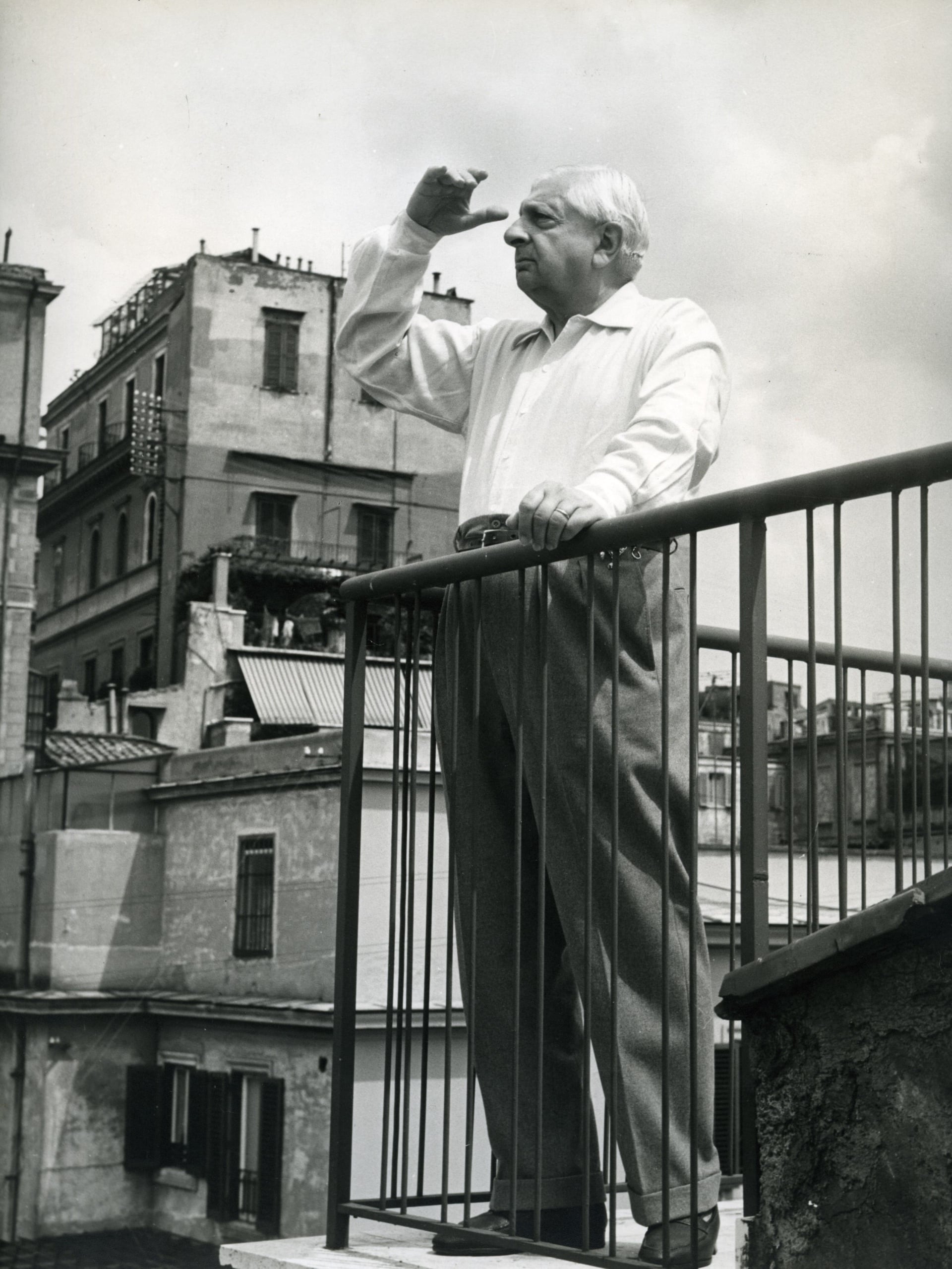 In January 1938, he returned to Italy and settled in Milan, before leaving again for Paris, outraged by Italy’s racial laws. When Italy entered the War he could not stay on in France and had to return. He exhibited in Rome’s III Quadrennial d’Arte Nazionale. During the war Luigi Bellini, a Florentine antiquarian and friend, hosted de Chirico and Isabella who was a Russian Jew born in Warsaw. In Florence, he began creating terracotta sculptures: the Archaeologists, Hector and Andromache, Hippolytus and his Horse and a Pietà. In 1944 he settled in Rome and in 1947 set up studio and home at n. 31 Piazza di Spagna where he would live for the rest of his life. He intensified research on the great masters and executed a number of pastiches of paintings by Rubens, Delacroix, Titian, Watteau, Fragonard and Courbet. He began a fierce battle against the falsification of his painting, which had begun in the mid-1920s. In 1945 he published his autobiography The Memoirs of Giorgio de Chirico and The Comedy of Modern Art, a collection of critical-theoretical essays. At the end of 1948, he was elected an honorary member of the Royal Society of British Artists where a one-man show was held the following year. On 5 May 1952 Alberto Savinio died.

He illustrated Manzoni’s The Betrothed in 1965 and Quasimodo’s translation of The Iliad in 1968. At the end of the 1960s, he began casting bronze sculptures. In 1968, at 80 years of age, he began a phase of research known as Neometaphysical Art, in which he took up once again classical subjects of his art from the 1910s, 1920s and 1930s, such as the Italian Piazza, the Mannequin, the Metaphysical Interior, the Archaeologists and The Sun on the Easel, reinterpreting these with bright colours and serene atmospheres compared to the disquieting mood seen in his early metaphysical period. With a profound sense of poetry, new combinations of subjects appeared within the innovative spatial compositions such as the Italian Piazza and the Metaphysical Interior, newly inhabited by mythological characters such as Minerva and Mercury. In 1970, an important retrospective of his work was held at Palazzo Reale in Milan. In 1972, De Chirico by de Chirico was held at the New York Cultural Center with 182 works from the artist’s collection including paintings, drawings, sculptures and lithographs. De Chirico travelled to New York for the occasion. In 1973, he created the Mysterious Baths Fountain in Milan’s Sempione Park for the XV Triennial. In 1974, he was elected to the Academy of France. On 20 November 1978 Giorgio de Chirico died in Rome at 90 years of age. 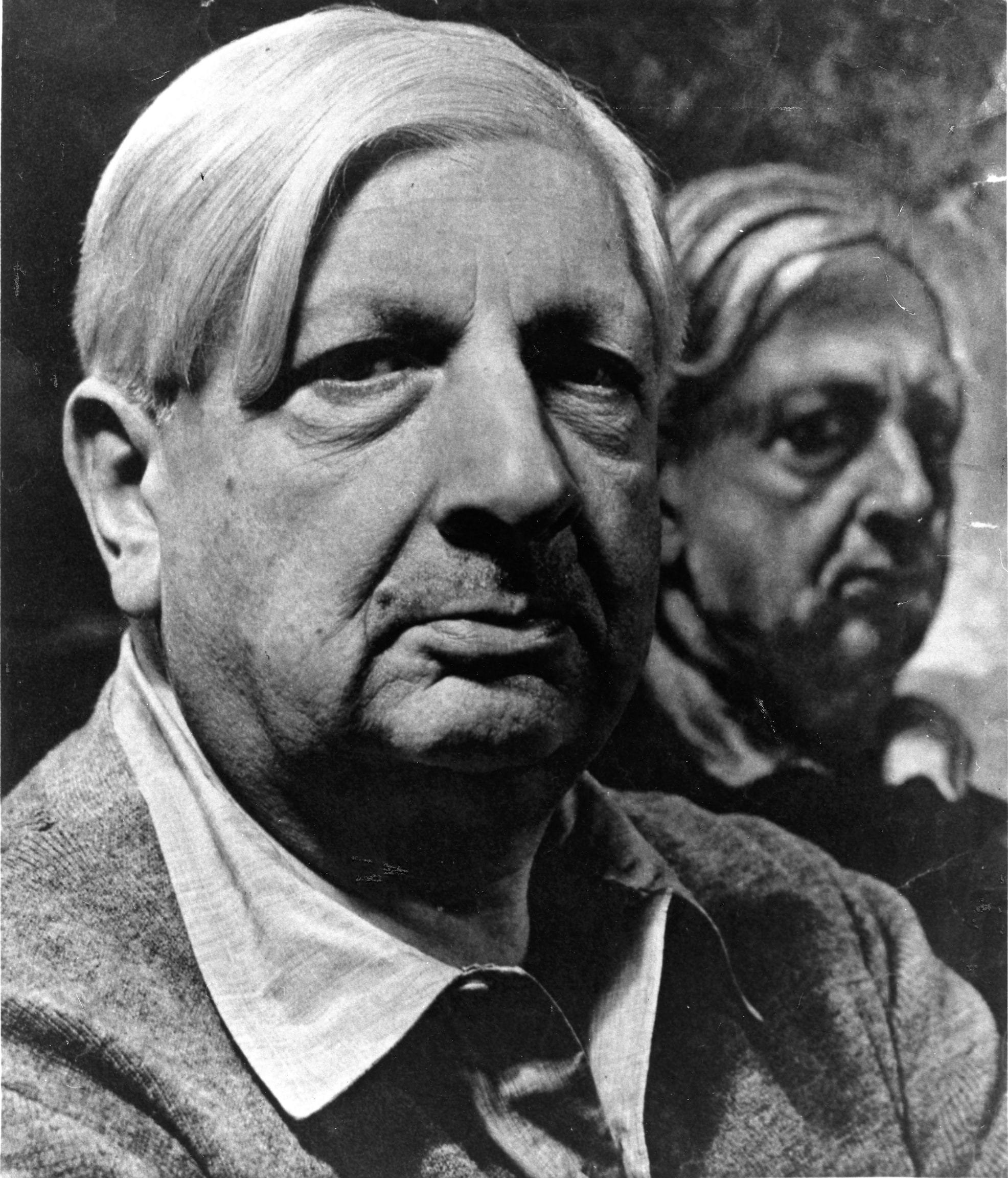