New Collection Exhibition “The Art of Weights and Measures” 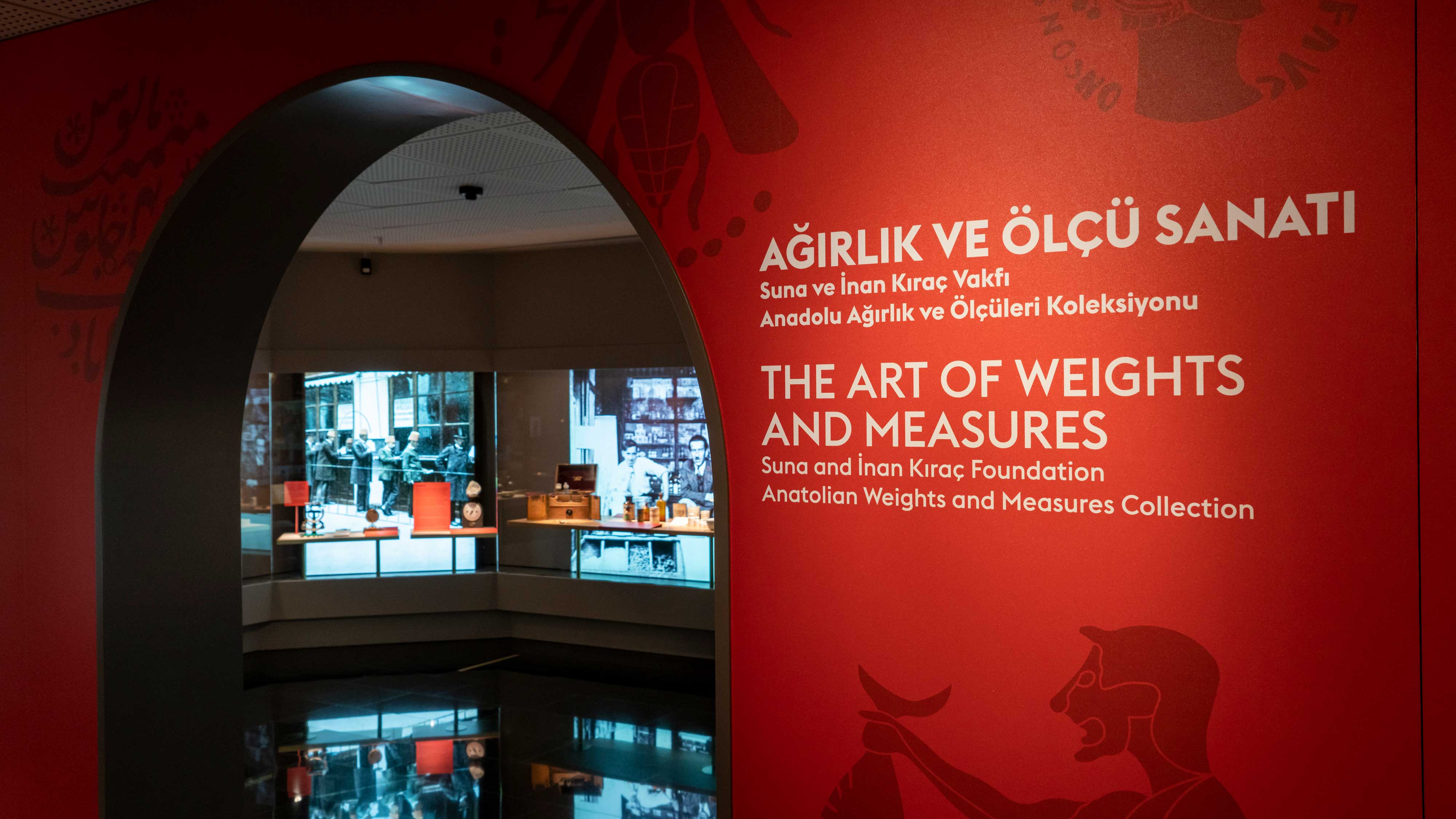 Pera Museum presents a new selection from Suna and İnan Kıraç Foundation Anatolian Weights and Measures Collection. The new exhibition titled “The Art of Weights and Measures” aims to explore from the 2nd millennium BC to the present day, how weights and measures have shaped economies, cultures, and intercultural relations, their impact on social dynamics of trust, and their journey towards becoming standardized units.

Suna and İnan Kıraç Foundation Pera Museum prepared a new exhibition for one of its three main collections, Anatolian Weights and Measures Collection. The new collection exhibition titled “The Art of Weights and Measures” examines the act of measuring and weighing, which is an important means of human self-expression, through an interdisciplinary lens with anecdotes from history. The collection exhibition, which includes many weight, length and volume measurements from various fields such as land measurement, shopping, architecture, pharmacy, astronomy and time measurement, examines the practical and philosophical relationship between the geography and the concepts of weights and measuring instruments, as well as the development of civilizations and their transformations through everyday objects.

A historical journey in the world of measures

The history of weights and measuring instruments, which could not find the place it deserves in ancient sciences, goes back much further than the invention of money. The endeavor to measure the world with a handful of units brought forth the capacity to recreate it in the abstract. As the measurement of discovery became the substance of myths, weighing and measuring, beyond being mere physical actions, became an important means of self-expression to those captivated by the universe and what lay beyond the boundaries of knowledge. Pera Museum, which holds one of the world's leading weight collections, examines the measuring practices of Mesopotamian and Anatolian geographies in “The Art of Weights and Measures” exhibition.

“A story told through the eyes of civilizations, gods, merchants, master craftsmen, and their apprentices”

Suna and İnan Kıraç Foundation Arts & Culture Enterprises General Manager M. Özalp Birol, who notes that Anatolian Weights and Measures Collection guides the visitors through this journey with hundreds of different types of weights and measures from the Classical Age to Ottoman Period, says “Our new collection exhibition allows us to explore how weights and measures have shaped economies, cultures, and intercultural relations, their impact on social dynamics of trust, and their journey towards becoming standardized units, through the eyes of civilizations, gods, merchants, master craftsmen, and their apprentices from the 2nd millennium BC to the present day.”

From the realm of gods to the land of mortals

The exhibition project manager Hazel Rössle points out that with the continuous fascination with precision in weighing and measuring, a corresponding migration of myths from the realms of the gods to the land of mortals emerged, and explains: “Concepts like truth and justice became associated with the balancing of the suspended pans of weighing scales. In ancient Egypt, the sins of the deceased were weighed on a set of scales, while in ancient Greek and Roman cultures, the weighing scale was a symbol of justice and an indispensable illustrative element in the depiction of gods and goddesses. In Byzantine society, too, the act of just and accurate weighing resonated deeply with ethical sensibilities and recalled the weighing of souls. And in the Ottoman Empire, precise weighing represented the foundations of trust, not only in trade but also just as notably in religious life.”

The collection is expanding with historical and contemporary pieces

Two pieces from the Anatolian Weights and Measures Collection are now on exhibit for the first time as part of the Art of Weights and Measures exhibition. The first one is a 19th-century paper icon representing the Second Coming and the Last Judgement. The composition with the scale at the center of the icon derives from the belief that the dead will be judged according to their deeds as described in the Bible. The focus on the balance scale in Last Judgement compositions reminds us that just, accurate weighing is a command of God. The earthly court, centered around the figure of the emperor, represents a mirror of the heavenly court, while earthly justice serves as a counterpart to heavenly justice.

Pera Museum also continues presenting new works inspired by its collections. Artist Avşar Gürpınar’s new installation Le Grand K2 gets its inspiration from the Anatolian Weights and Measures Collection and brings a contemporary perspective into the Art of Weights and Measures exhibition.

For 130 years, the cylindrical platinum-iridium mass weighing exactly one kilogram, named Le Grand K, was the universally accepted standard of weight. Even though it had only lost fifty micrograms since that time—equivalent to a speck of dust or an eyelash—in 2019 it was put out of service and equated to a formula called the Planck constant. In an age when every unit of the International System of Units (SI) are, one by one, being based on absolute numbers and constants, artist Avşar Gürpınar, who questions this extremely precise and rigid system that has been brought to our flexible and variable world, says “Our world is imperfect in every way, full of faults and margins of error. Therefore, we need a new Le Grand K, based on a real object, which allows analogue conversion and which will keep up with our imperfections.” Le Grand K2, produced by the artist to transform the kilogram back into a physical mass, is a barite stone extracted from the Şarkikaraağaç region of Isparta and carved with precision and brought to 1 kg. Visitors can follow the weight of Le Grand K2, which is placed on an analogue scale in the collection.

New Publication: “The Art of Weights and Measures”

The publication titled The Art of Weights and Measures is comprised of ten chapters includes the new articles “An Overview on Scales and Scale Weights Throughout History” by Oğuz Tekin, “Astragalus-shaped Roman Weights” by Charles Doyen, “The Art of Weighing in Byzantium” and “The Scales of Justice on a 19th Century Icon” by Brigitte Pitarakis, and “Ottoman Surveying Technology and Havayi Terazi (16th-18th Centuries)” by Uğur Tanyeli. The book can be purchased through Pera Museum Artshop, contracted bookstores and online shopping platforms.

The Art of Weights and Measures exhibition can be visited on the first floor of the Pera Museum in Istanbul.