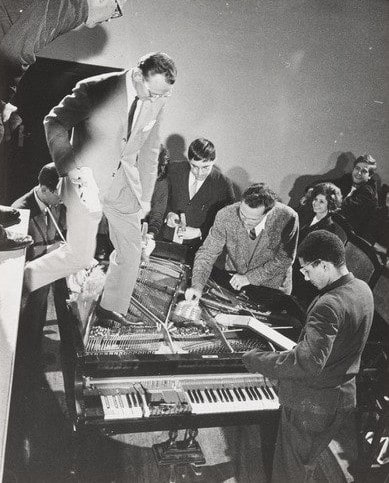 The performance was, indeed, a genuine ‘symphony of destruction,’ which became one of the characteristic signs of that irreverent coterie of artists who regarded destroying instruments as something radical in the sphere of ‘highbrow’ art. However, five years earlier someone with few, if any, intellectual aspirations had beat them to it: in 1957, during a show at the Paramount Theater in New York, Jerry Lee Lewis, in an act of protest against having been billed as the curtain-raiser for Chuck Berry, went on stage with a Coca-Cola bottle full of petrol and set fire to his piano while he was performing Great Balls of Fire. At the end of the song, he shouted to Berry ‘Follow that, nigger!’

Although it seems that this was the only time that Lewis actually set fire to his piano, the outcome of the mass catharsis that, according to reports, his ‘action’ caused, led Lewis to end most of his concerts either dancing on his piano or playing it with his toes.

Apparently it took Chuck Berry a long time to forgive Jerry Lee Lewis for that insult. Nonetheless, the act of burning an instrument on stage reached its high point with another Afro-American artist, Jimi Hendrix, on June 18 1967 at the Monterey Pop Festival. The guitarist from Seattle, who was still practically unknown in his home country, finished his performance in a spectacular way: as he was playing the last chords of Wild Thing he set fire to his Stratocaster and sat down theatrically in front of it as if enacting a ritual. Moments later, he destroyed it and threw its remains into the audience…

Most probably, Hendrix’s performative act at Monterey had more to do with some kind of ancestral rite than with Fluxus, although it is strikingly significant that only a few months later Annea Lockwood, a New Zealand artist who declared herself influenced by the DIAS (Destruction in Art Symposium) organized in London in September 1966, performed Piano Burning in the same city in collaboration with Richard Alston, of the Strider Dance Company, which has been the object of several remakes ever since, in which she deliberately established a confluence between Hendrix and Lee Lewis’s firework displays and the Piano Activities of Philip Corner and George Maciunas.