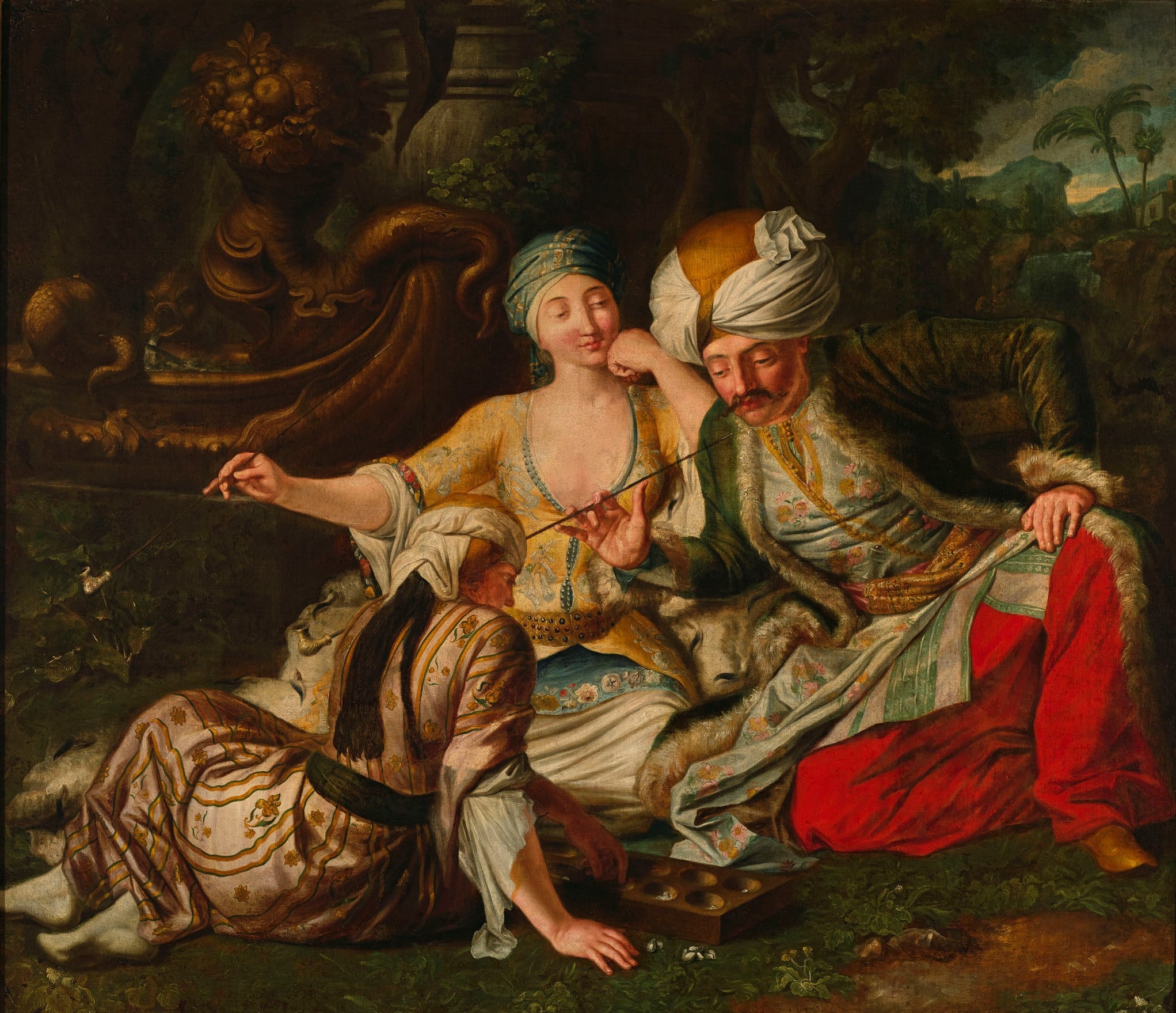 Three figures in Eastern dress are shown in repose against an exotic landscape, smoking pipes and playing mangala. Inventories of the royal collections from 1739 identify the members of this group as the royal eunuch Matthias and two odalisques. The rococo otium is set in a saray garden. The general remove from the bustle of daily life is combined with intellectual exercise in the form of a game of mangala (Arabic manqala) in which pebbles or shells are arranged in accordance with the rules of logic on a board with twelve round recesses, or “homes”. Mangala appears in European compositions from the 1740s by artists such as Giovanni Antonio Guardi (Two Odalisques Playing Mangala in the Harem, now at the Museum Kunstpalast in Düsseldorf) and in the drawings produced by Jean-Étienne Liotard during his sojourn in Istanbul (e.g. Two European Women in Turkish Dress Seated on a Carpet and Playing Mangala, British Museum). Such images sat well with the idealised conception of the Orient as a realm of sensual arousal, repose, and unending pleasure.

The fashion for Turquerie prevailing at European courts in the 18th century also yielded musical and theatrical works drawing upon Turkish motifs. The court of King August II was the venue for masquerades and social gatherings in Oriental-themed fancy dress whose participants could pay at living in faraway lands. The king’s affinity for the exotic also found its expression in four stylised genre scenes adorning his Saski Palace among which the present painting was included. The royal porcelain works in Meissen decorated its wares on the basis of engravings illustrating the accounts of Charles de Ferriol, French ambassador to the Ottoman court. Published in 1714, de Ferriol’s tales of his time in Turkey were lavishly illustrated with engravings based on the paintings of Jean-Baptiste Vanmour, who accompanied the French diplomat on his mission to Constantinople. The first French translation of the Tales of a Thousand and One Nights (also known in the West as The Arabian Nights), completed by Antoine Galland in 1704, also fell on fertile ground with the general public.