Take a look at this 5 unmissable Istanbul paintings from the exhibition! 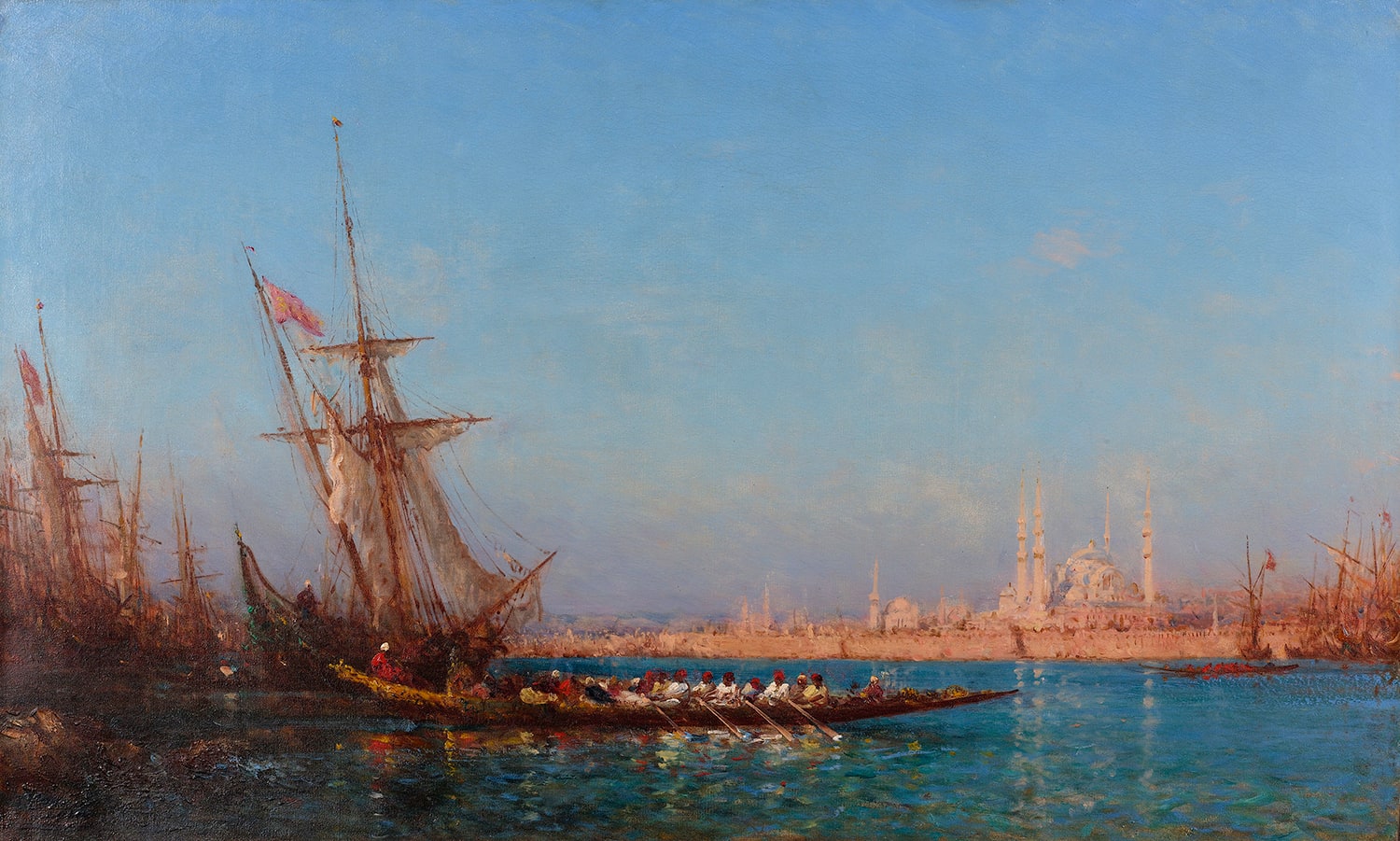 Rather than presenting a realistic depiction of the city, this particular İstanbul painting of Ziem also reveals the picturesque aspect of life at sea against the backdrop of the city’s silhouette. The composition of the sailboats and marines in the foreground is balanced by the cityscape with a monumental mosque structure in the background. The artist’s use vibrant colors and his efforts to capture the shimmering effects of the constant change of light with a fast, dynamic brushstroke technique dominate the painting. This style has led Ziem to be compared with Impressionist painters, even to be regarded as an artist who foreshadowed the emergence of Impressionism with his work. The use of brilliant sunlight, which is considered as the major contribution of Orientalist painting to European art, is evident in the cityscape in the background. Figures painted with a few brushstrokes appear in the piyade (light rowboat) in the foreground. 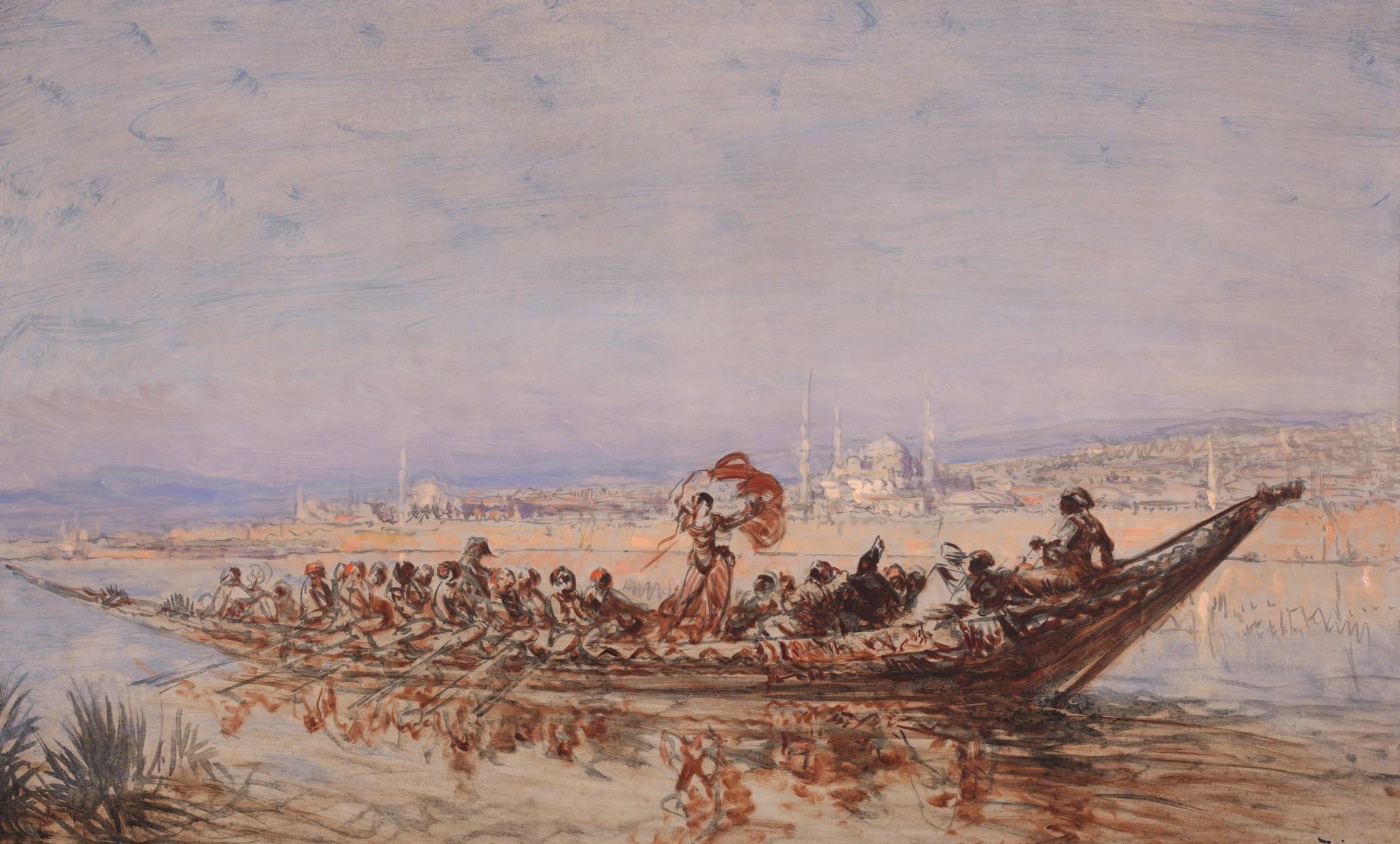 In this somewhat Orientalist sketch that stands somewhere between a drawing and an oil painting, the artist combines two of his favorite topics – the dancer and the “piyade”-type caique, with the Bosphorus in the background. In Ziem’s paintings, human figures are usually distant and vague, handled with a few touches of color as in the Venetian paintings of artists like Guardi. On the other hand, some of Ziem’s sketches of Istanbul contain a sizeable number of elaborate figures. The attempt to bring together these two different approaches is emphasized with the pochade on this subject that is part of the exhibition

3- Caiques and Sailboats at the Bosphorus 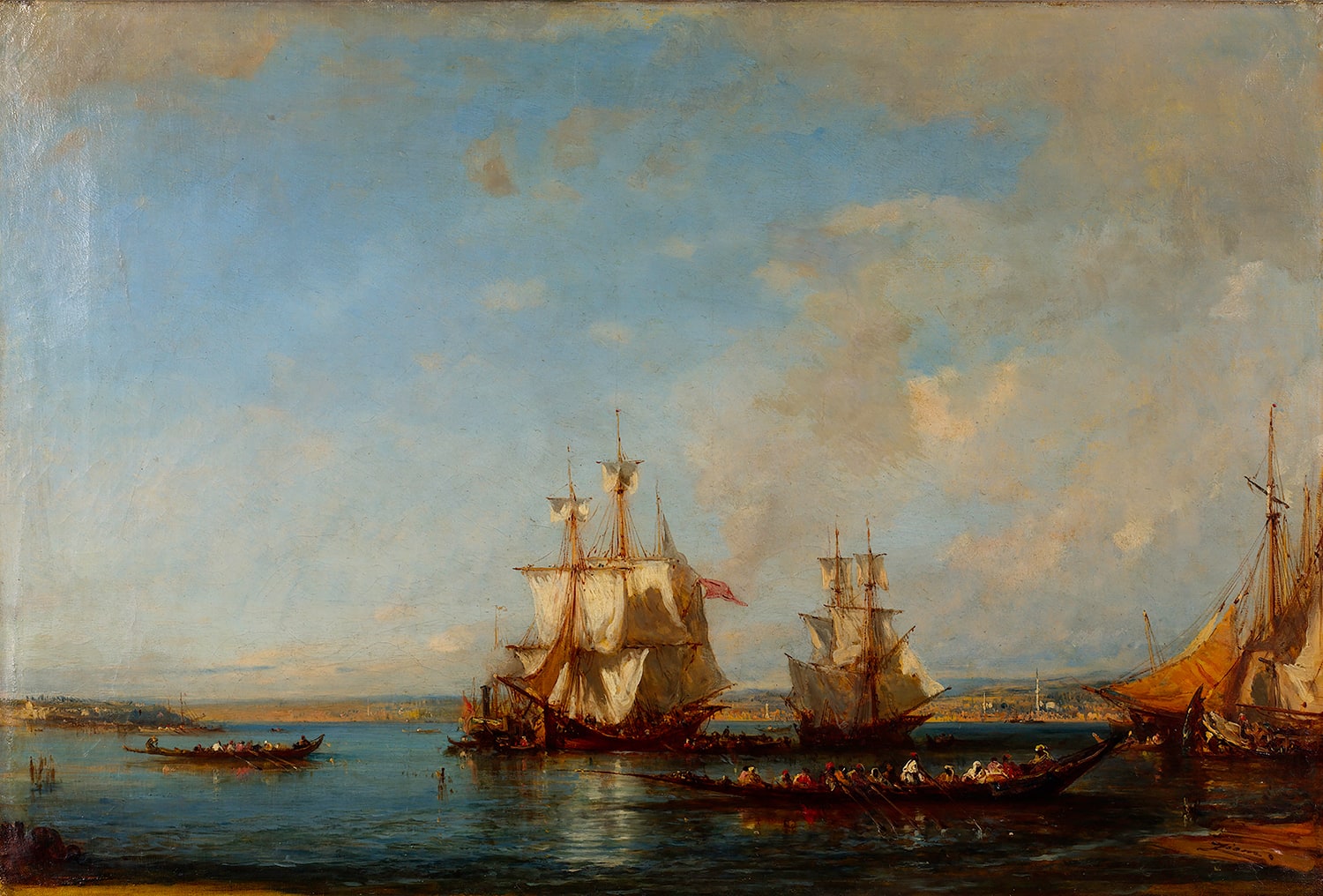 Caiques and Sailboats at the Bosphorus, Second half of the 19th century, Oil on canvas, 55 x 81 cm., Suna and İnan Kıraç Foundation Orientalist Paintings Collection

Felix Ziem must have completed this painting, in which he depicts the animated life of the Bosphorus, after having returned to his country, using the sketches he made in İstanbul. While Zeim was an artist who was able to produce works of various styles such as portraits, still life, genre scenes, and historical depictions, he is primarily renowned as a landscape artist; he was an active member of the Barbizon school, which primarily focused on the depiction of nature. In this painting, İstanbul is represented through a few mosque silhouettes in the background. Nonetheless, as in his Venetian scenes, the painting emphasizes the picturesque union of the city, the sea and human figures, which have been reduced to mere color stains. Ziem, who produced his own paints from natural pigments, influenced other artists with the use of color in his paintings. Van Gogh, for instance, once noted that he would like to “make blues like Ziem does”. The artist is known to have used “lapis lazuli” for the dominant blue color in this painting.

4- Sunset over the Bosphorus 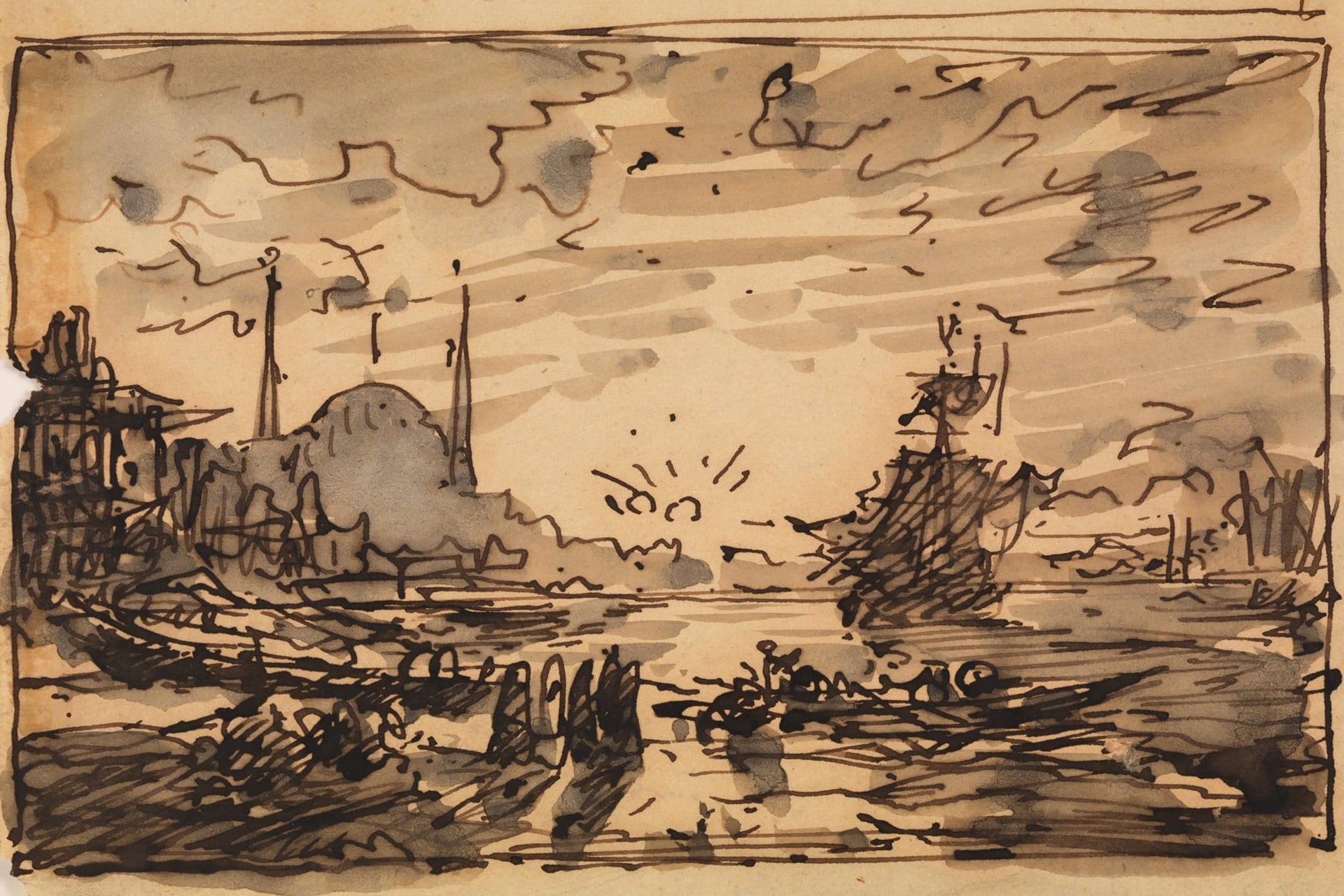 This drawing depicts the outlines of a romantic and imaginary Istanbul, providing insight into the methods of the artist. It is interesting that even such a small drawing can display the various pronounced aspects of Ziem’s paintings. Light is the major point here and the sun is placed between an exaggerated mosque silhouette and a sailboat. The line of horizon was kept low to give greater space to the sky. Despite the ambiguous outlines of forms, the artist always uses perspective correctly, having been trained as an architect, and here he uses shadows to emphasize perspective. The caique and the pier in the foreground have been used to capture this deep movement towards the sun at the center. 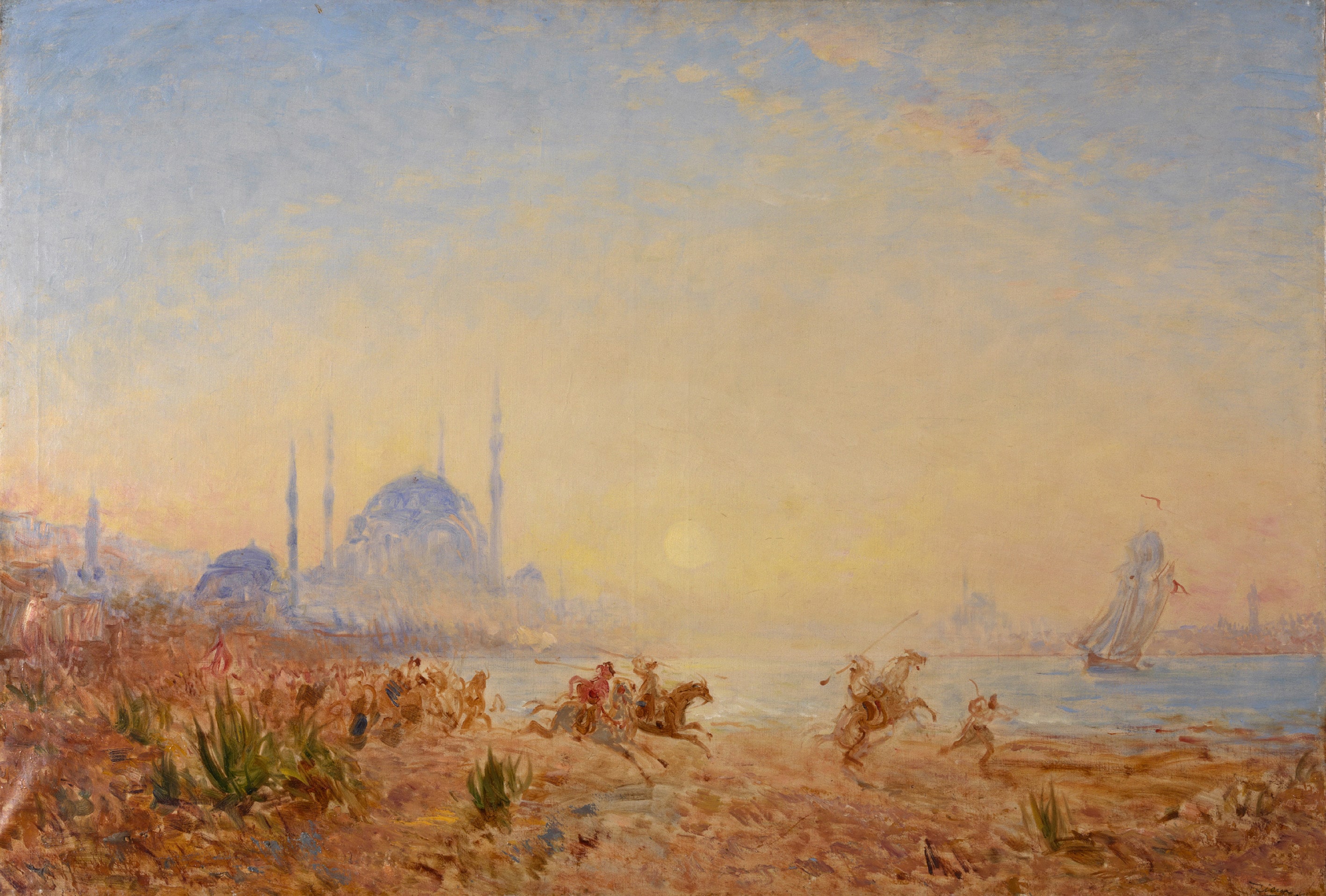 Ziem came to Istanbul right after the Crimean War in 1856 for two months, wandering around in the city and making numerous drawings, which would later provide the basis for his oil paintings he made in his studio. The artist used these visual notes not to create totally faithful renderings of Istanbul but rather to create his own imaginary city. This painting depicts such an imaginary view of Istanbul, where the golden sun at the center shines upon horsemen with javelins on the shores of the Bosphorus. 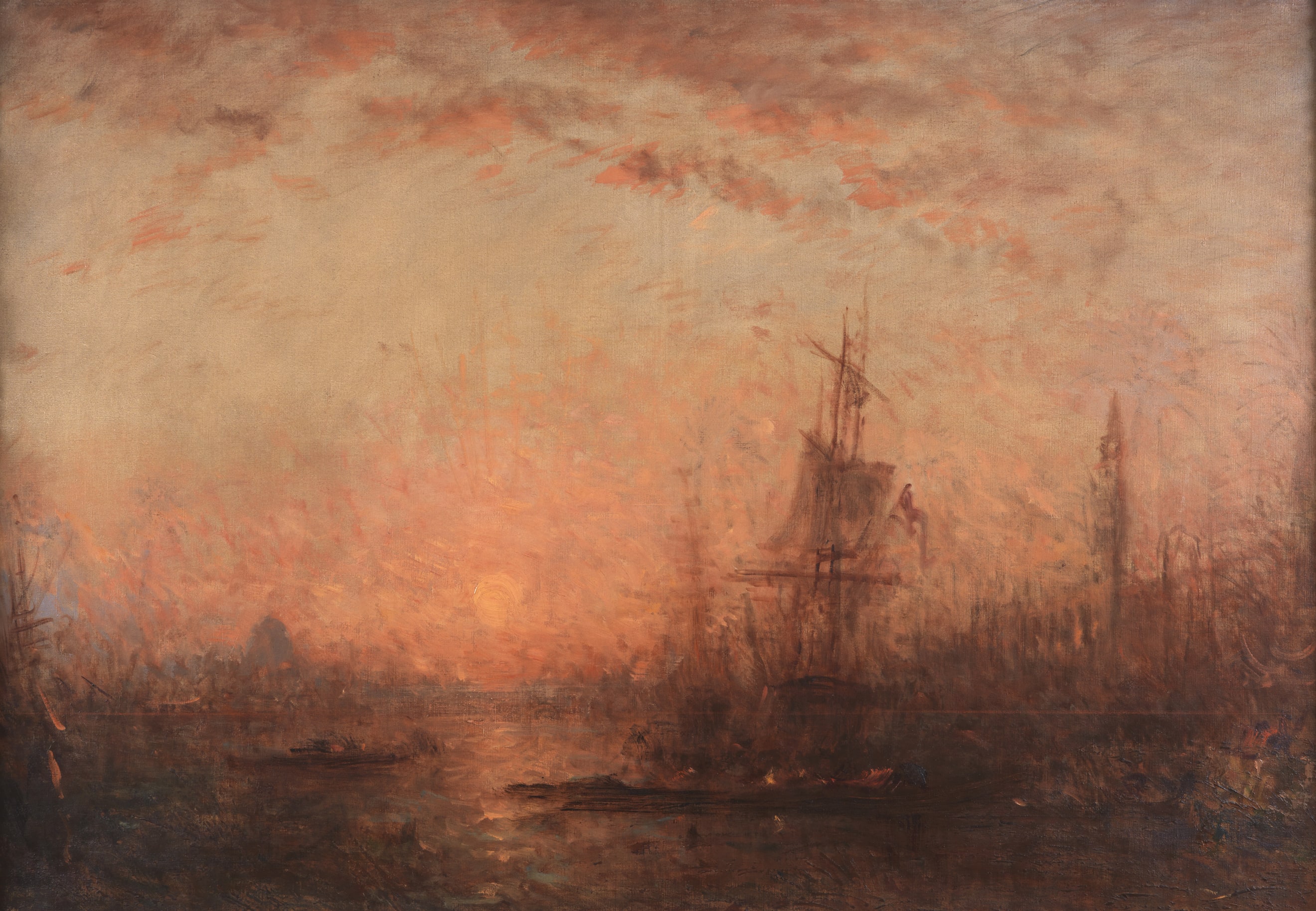