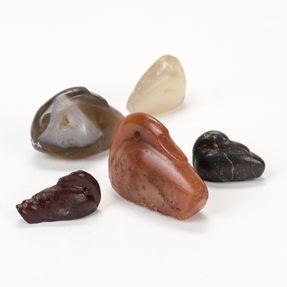 Weights in the form of Sleeping Duck

Used frequently in Mesopotamia and known as the Babylonian type, these weights are in the shape of a stylised duck with its head turned backwards and leaned against the body. A horizontal hole is at the intersection of the neck and the head.

Motifs engraved on the undersides are thought to be marks identifying the owner.

Very similar weights have been found in the Near East, where they are known to belong to the system of weights used in the Early Babylonian period in Mesopotamia, and therefore must have been introduced into Anatolia by Assyrian merchants. Similar weights have also been found at other sites in Anatolia, and were probably produced as the equivalents of units of weights such as mana and shekel that were used in the countries of the Near East at this period.

The weights that belong to this period were frequently shaped as animals, one of the most common animal being the duck-shape seen here.