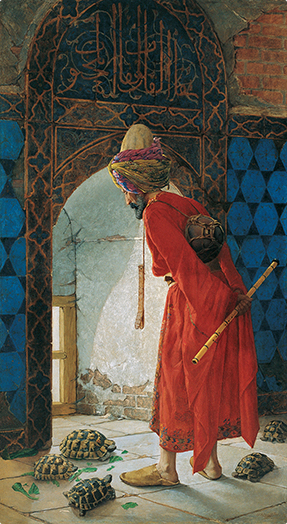 As the first and last Orientalist painter of the Ottoman Empire, Osman Hamdi Bey had the unique opportunity to observe the East from within. Rather than depicting the “other” as a number of foreign painters did, he portrayed his own culture and propounded his own cultural perceptions. His works, which often reflect the Ottoman tradition and culture, manifest a meticulous and realistic approach to all the elements featured in a scene, ranging from daily life to architecture and from objects to ornamentation. Osman Hamdi is an artist who not only incorporates the use of figures, but also introduces an intellectual dimension to Turkish painting.  The Tortoise Trainer should thus be evaluated in light of this dual aspect. Osman Hamdi, who often used his own photographs as models in his figurative compositions, once again repeats the same technique in this painting and depicts himself in the appearance of a dervish. The architectural décor suggests that the scene takes place in one of the upper-story chambers of Bursa’s Yeşil Camii (Green Mosque). Dressed as a dervish and slightly bent over, a man is examining in a contemplative fashion, the tortoises roaming on the floor. He sports an araqiyya, a flattish skull cap commonly worn by dervishes, with a destar, or sash wrapped around it. He wears a belted, long red robe the borders of which are embroidered; his feet are clad in çedik, or slippers for indoor wear, made of yellow sahtiyan, Moroccan (goatskin) leather. He holds a ney in one of the hands he has clasped behind; a nakkare, or a small kettledrum hangs down from his back. While all these details do not necessarily signify allegiance to a particular sect, they are nonetheless elements derived from the attire of a dervish. The dervish is to train these thick-shelled, laggardly tortoises not by using force, but rather by playing the ney and nakkare, namely through art.