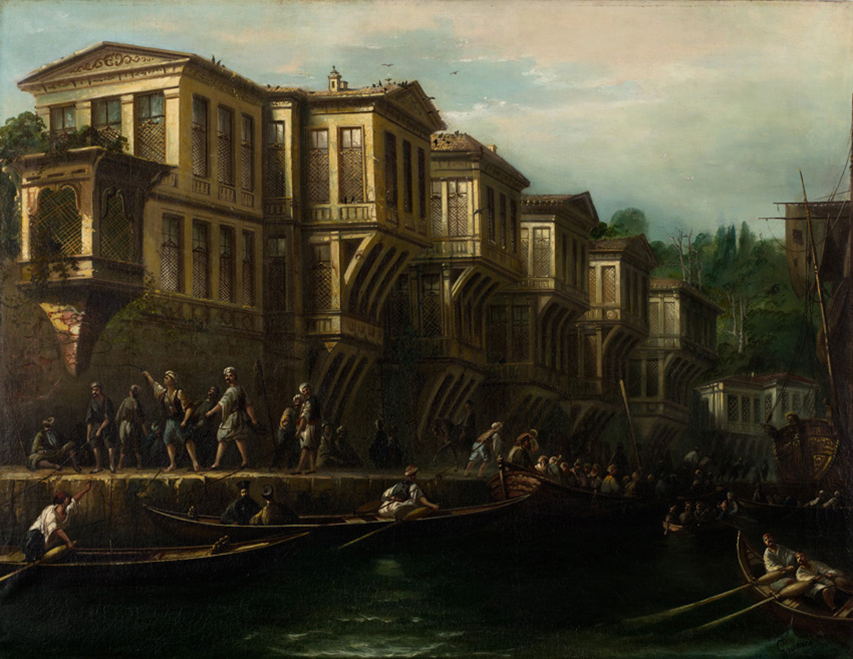 British architect and painter Thomas Allom (13 February 1804, London – 31 August 1872, Barnes) graduated from the British Royal Academy. During the initial years of artistic career, he was apprenticed to Architect Francis Goodwin. From the 1820s onwards, he ventured on extensive journeys across England and continental Europe, creating paintings of various cities in England, France and Belgium. He also designed several structures in England. Exhibiting his projects at the Royal Academy between 1827 and 1871, Allom was one of the co-founders of the Institute of British Architects. He collaborated with Sir Charles Barry on a number of different projects, including the Parliament Building. Between 1834 and 1836, he journeyed across İstanbul, Anatolia and Palestine and painted extensively. These works were reproduced as engravings and included in Robert Walsh’s Constantinople and Scenery of Seven Churches of Asia Minor, which was published in London in 1838. The artist also produced a number of İstanbul depictions for L. Gallibert and C. Pelle’s books, Constantinople Ancienne et Moderne and Character and Costume in Turkey and Italy. Allom has a number of works on China, which were published in China Illustrated in 1845.

The painting is a copy of the composition printed as an engraving in the first volume of Thomas Allom’s book Constantinople and Scenery of Seven Churches of Asia Minor. Written by the Robert Walsh, who served as the private priest of British Ambassador Lord Strangford after 1820, the book was published in two volumes in London in 1838. It includes engravings produced largely from Allom’s works. The engravings in the book, which was later also published in French, acted as important visual resources on İstanbul and were used as models by numerous artists.

In this painting, the Ottoman artist Civanyan uses the above-mentioned source to depict an older view of İstanbul that predates him. Although it is not reflected in Civanyan’s painting, according to Walsh, Said Paşa, took advantage of a privilege that was not granted to the non-Muslim subjects of the Empire, and had his mansion painted in a rose color to imply his marital bliss with this symbolic color. While this nonextant mansion in Bebek, which once belonged to Said Paşa –who was married to Mahmud II’s daughter Mihrimah Sultan– dominates the painting, the work also reflects various segments of daily life of İstanbul, a city surrounded by seas. Among such details, the porters pulling the boats along the shore –as this is the part of the Bosphorus with the strongest current– are particularly striking.