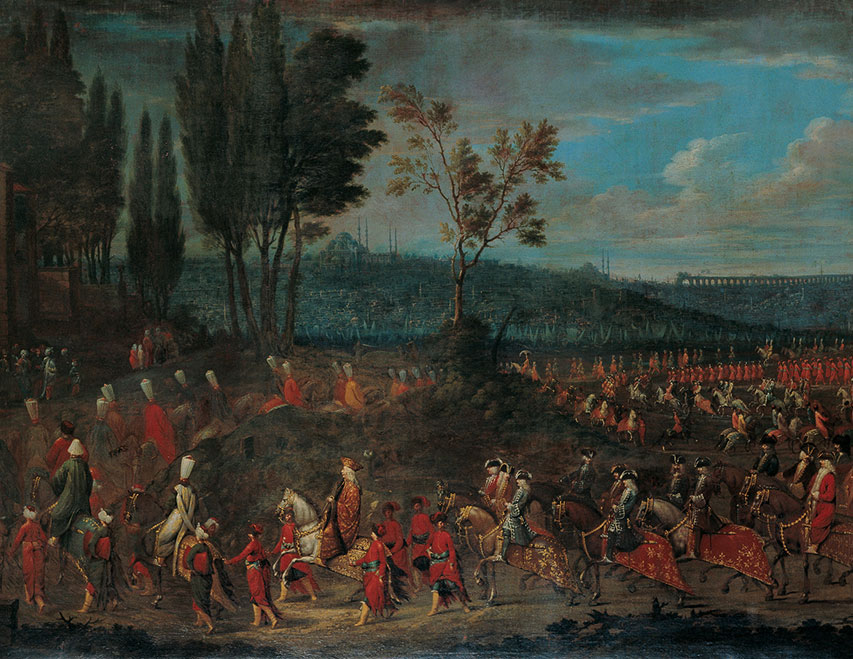 French painter of Flemish origin Jean Baptiste Vanmour (1671 Valenciennes – 1737 Istanbul) is thought that be a student of Jacques-Albert Gerin, who was also the teacher of Antoine Watteau. In Paris, where he had gone in 1699, he attracted the attention of the Count of Ferriol, who had been appointed to Istanbul as ambassador, and accompanied him to Istanbul in that same year. In Istanbul, de Ferriol commissioned various paintings depicting Ottoman dignitaries and people of various nationalities. A group of these paintings, which Vanmour did between 1707-1708, were reproduced as prints and published as an album in 1714, with the title “Recueil de cent estampes représentant différentes nations du Levant”. In later periods, the prints in this album were used by many painters as models for the painting of Ottoman types. Vanmour also worked for Viscount d’Andrezel, who was the French ambassador after de Ferriol, and for the ambassadors of some other European countries. Among his work are depictions of the official receptions of ambassadors, scenes of daily life, various kinds of clothing, and views of Istanbul. He also painted the leaders of the Patrona Halil Revolt, which broke out while he was in Istanbul. It is believed that Vanmour established a studio in Istanbul that also employed local painters, whose services he employed in the production of some of his paintings, and that the studio continued its activities for some time after his death.

The painting depicts the passage of a European ambassadorial delegation, escorted by Ottoman dignitaries, along the hills of the Pera district of Istanbul. The ambassador, who has been placed in a quasi-central position in the foreground, is seen riding a white horse near Galata Cemetery. This painting is part of a series by Vanmour, part of this exhibition, depicting the phases of the reception of the same ambassador. The ambassador depicted in this series could be the Venetian Bailo Francesco Gritti, who served in Istanbul between 1723 and 1726. In the foreground there is a company of janissaries, on the left a group of people watching the procession, while in the background Golden Horn covered with sailing-boats, Süleymaniye Mosque and Bozdoğan Aqueduct are visible. On the bottom left corner a signature on a stone is visible: Vanmour pinxit.