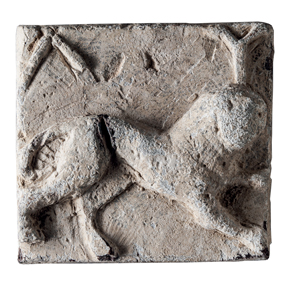 The square-shaped bronze weight has a lion running right on the obverse and its mass corresponds to a mna. Inspired by the weights and measures systems of Mesopotamia, the Greek city states adopted the same unit names for weights. However, they each developed unique weight standards of their own. The Mesopotamian weight unit mana, for instance, was changed to mna. However, its mass correspondence varied from region to region.

The lion figure on the obverse is the civic badge of the ancient city of Lysimakhea. The ancient city which was founded by the King Lysimakhos in 309 BCE perched in the Gallipoli Peninsula upon a hill that overlooks both the Marmara Sea and the Gulf of Saros.

As to whether the story at hand is actually real, a definitive answer remains elusive. Yet, the same lion figure had been employed to mark both the Lysimakheia city-weights and the coins of the King.