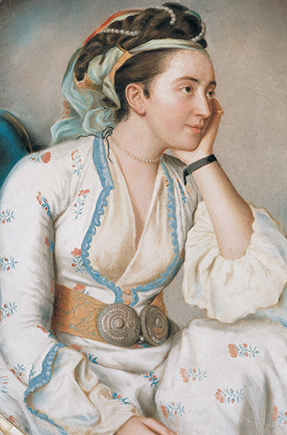 A Woman in Turkish Dress

Jean Étienne Liotard (1702 Geneva – 1789 Geneva) was Swiss and the scion of a family of French origin. He received his first instruction in Geneva, at the studio of the miniaturist Daniel Gardelle. In 1723 he went to Paris and became a student of Jean-Baptiste Massé, miniaturist and engraver. During his stay in Italy from 1736 to 1737, he painted the portraits of Pope Clément XII and of Cardinal Biancheri. In 1738 he undertook a trip to the Orient with Sir William Ponsonby, whom he had met in Italy and who later was awarded the title of Second Earl of Bessborough, and a group of Englishmen. He first went to İzmir and from there to Istanbul, where he stayed four years. Growing a beard and dressing in Ottoman attire during his stay, Liotard depicted dignitaries of the court or of the embassies and non-Muslim women in local costume. When he returned to Europe, he brought Turkish clothing with him and painted portraits of his subjects wearing them, for which he became known as the ‘Turkish Painter’ and became one of the pioneers of the Turquerie movement, which spread throughout the West during the 18th century. Among the portraits he painted after returning to Europe are those of Marie-Therese Empress of Austria, of her daughter, French Queen Marie Antoinette, and of Jean-Jacques Rousseau.

Liotard painted various models in the same pose he used in A Woman in Turkish Dress, the same Turkish costume and similar background. In the note behind one of these paintings, which is presently in the Musée d’Art et d’Histoire in Geneva and was done in the early 1750’s, it is written that the lady depicted is a certain Mimica, a young Greek whom Liotard met while in Istanbul. Another of these models is Maria Gunning (1733-1760), Countess of Coventry, wife of George William Coventry 6th Earl of Coventry and society hostess. The oldest similar version the painter is a counterproof at the Louvre Museum, based on an unlocated drawing.