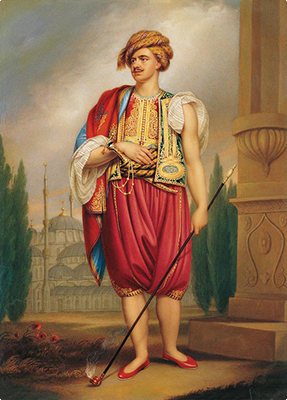 A Portrait of Thomas Hope in Turkish Costume

The painter of the oil version of this portrait was the English court painter Sir William Beechey (1753 Burford – 1839 London) was famous for his portraits, landscapes and mythological themes. Following his studies in law, he studied painting at the Royal Academy, where he was a student of Johann Zauffely (Zoffany). His work was exhibited at the Royal Academy beginning in 1776; he received many commissions in Norway during his stay there between 1782 and 1787. He worked in the tradition of Reynolds and in 1793 he became the portrait painter of Queen Charlotte, wife of King George III, gaining popularity for his portraits of members of the royal family. In 1798 he became a member of the Royal Academy and was awarded a knighthood for his painting of George III. From 1805 onwards, he exhibited his work at the British Institution in addition to the Royal Academy, and became the “Principal Painter” of William IV. It is known that John Constable was also among his students.

Henry Bone (1755 Truro – 1834 Somerstown) who copied Beechey’s portrait of Hope in enamel tecqnique was the first member of an English family of famous enamel painters. The son of a carpenter, after having studied painting as a child. Bone began an apprenticeship with a porcelain master in Plymouth and became famous for the landscapes and

floral paintings he produced in this workshop. In 1779 he settled in London, where he worked in an enamel workshop, decorating clocks and jewellery. He exhibited enamel miniature portraits at the Royal Academy between 1781 and 1831. Most of Bone’s work was in the enamel technique and it is known that he made copies of large size paintings. He was primarily known as a portrait painter and in 1811 he became a member of the Royal Academy. He painted some portrait series, including famous Englishmen of the Elizabethan period, and carried out experimental projects in enamel-painting techniques.

The sitter seen in this portrait is Thomas Hope(1770 – 1831). A collector, designer and writer. Thomas Hope, was the scion of a Scottish family of bankers.  He is known for introducing neo-classical taste to England. Hope opened for public viewing his home containing his collection of ancient and contemporary art.  He published his research on the subject of interior decorating in 1807, in a book titled Household Furniture and Interior Decoration, which was very influential during the Regency period. In the years 1787-1795 Hope toured Mediterranean countries. In this portrait, Hope has been depicted in Turkish costume and a mosque is visible in the background. His costume, pipe, headdress and the dagger in his belt, resembles the kalyoncu engraving in Choiseul-Gouffier’s album Voyage Pittoresque de la Grèce. On the back of the picture it is written that in this depiction, Hope is wearing his “Galcondgi” costume, which he used to wear in the Orient. The oil version of this portrait, of unknown date, by Sir William Beechey, which today is at the National Portrait Gallery, was exhibited for the first time in 1799.